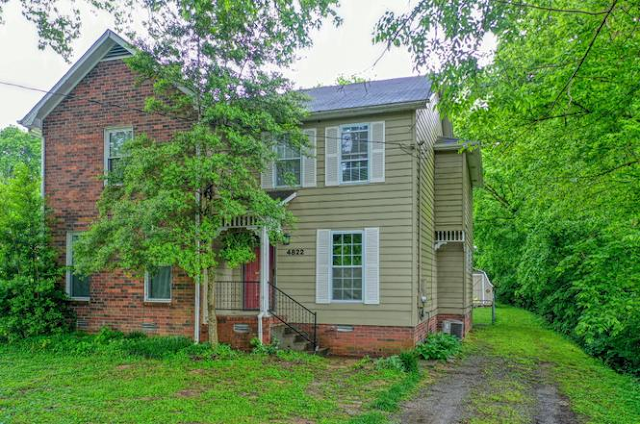 This is the house that I sold in June.
You may not know but this is
actually two homes in one.
I owned the siding part, and my
neighbor owns the brick part.
That is the only brick that is on her
house, the rest is like mine was,
wood siding.
I found these pics on line when Rebecca was
selling it and just recently located them
again. See where the driveway (gravel) ends?
It ends there cause I wanted it to end there.
When I bought, both sides were for sale
from the owner. He lived in Fla. and rented
out both sides. The gravel drive actually
went all the way around and connected
in the back. I had some issues with my
neighbor's son coming out my drive
so for me it was a given that
the drives needed to be seperate.
With that being said, the gravel went
all the way to the shed. I let the yard grow
in. Of course after taking on mom's dogs
I had to have that part of the yard fenced in.
Here are the pics Rebecca had taken for the sale.
Living room. 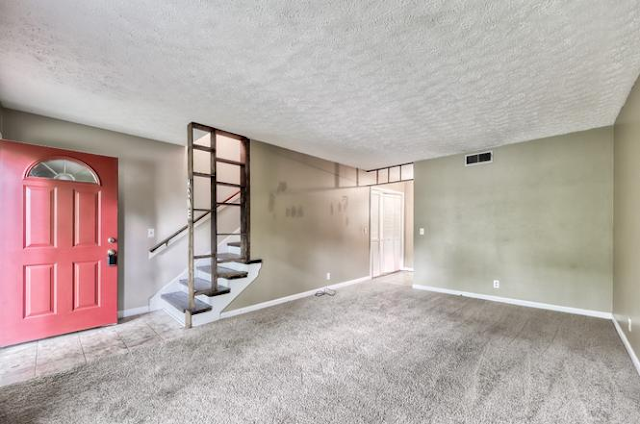 I put the open ended shelving in. Took the
hand rail out and built this. 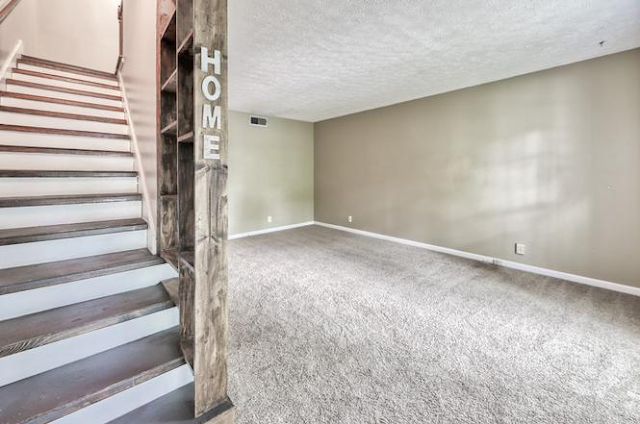 I left the word HOME so the buyer could
feel at home when he moved in.
If you go back to the first pic you will see
that I put a divider up at the living
room and the hall. 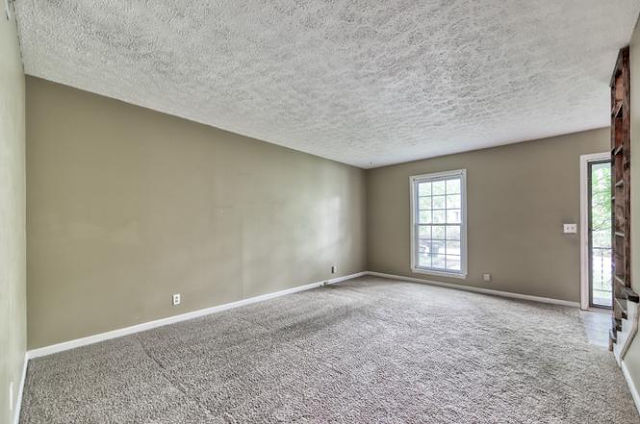 The kitchen. These were ulgy cabinets when
I moved in, builder grade wood. I painted them
shortly after moving in and again
before selling.
Before painting them for the sale
I had ivy leavs above each knob
on the cabinets. You can see the
ceiling fan got the ivy too. 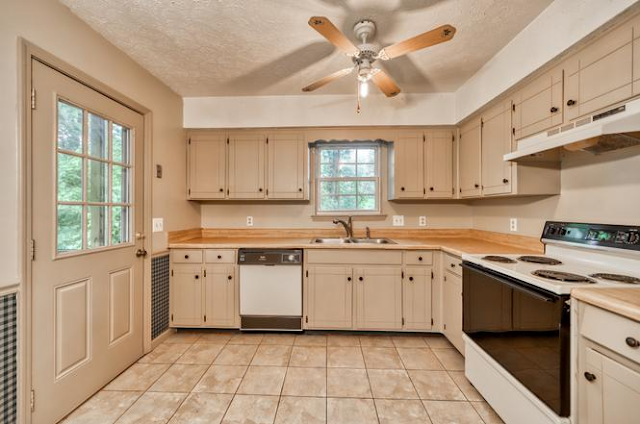 Peel and stick flooring I laid. 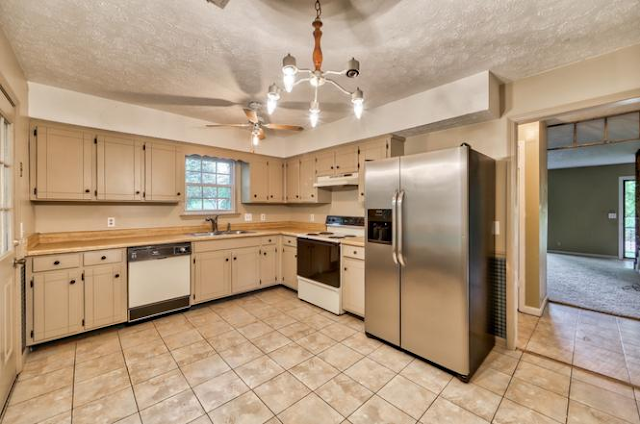 In the pic below you can see
the pantry door open. 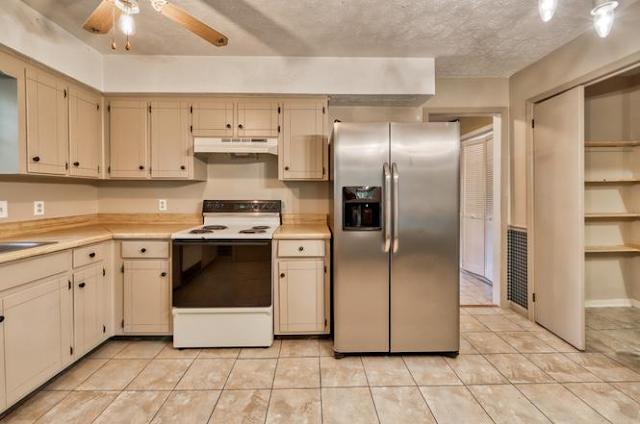 When I moved in there was some mavue
boarder up near the ceiling. The chair rail
was there so I papperd under it and painted. 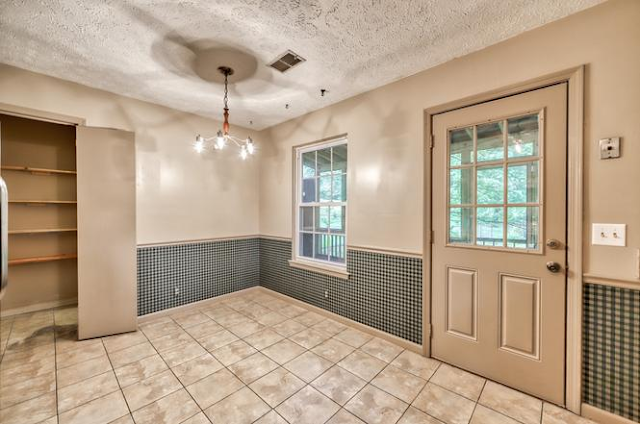 This is the hall between the living room
and the kitchen. The air unit is in
the last closet. The other closet
was a linen closet but most things
you store in the linen closet is
sheets and bath towels...
But bedrooms were upstairs!
I did not need this closet downstairs.
So I turned it into a coat closet since
there was not one. 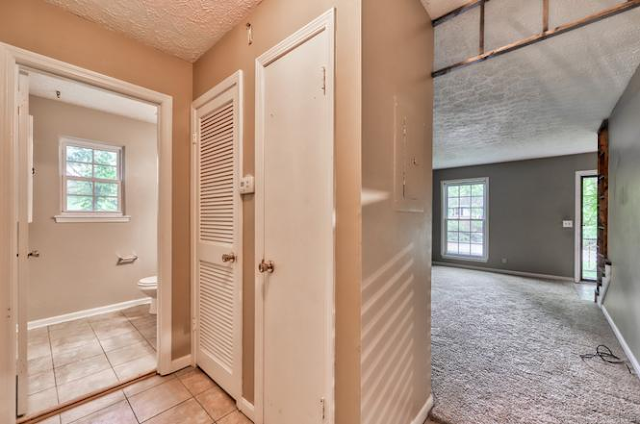 Downstairs bathroom.
This also included the same
builder grade cabinet and since
I could not afford to put new in, it
also got paint. I did however have
new counter and facuets put in, along
with new lighting. The toliet is not original to
the house either.  I also framed
in the mirror. 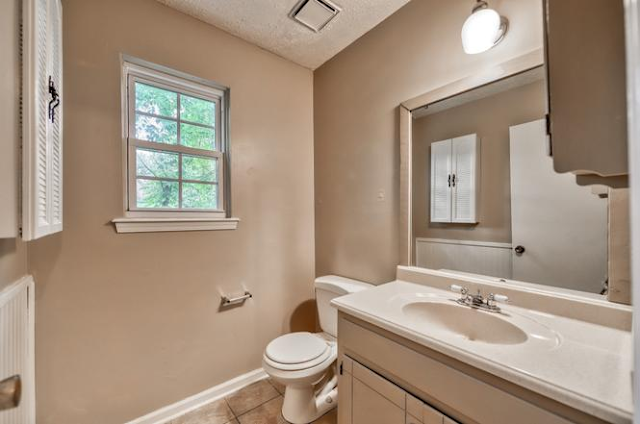 This is the washing machine area which
is in the middle of that hall on the other
end of the bathroom. I put up all
the shelves for storage.
The only storage in this place was
under the stairs, which is to the
left of the hotwater heater....
this required jumping up on the
washer and over it. Christmas times
was a blast digging all that out. 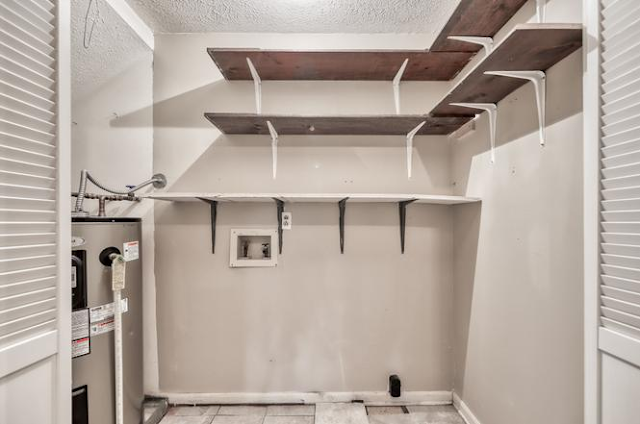 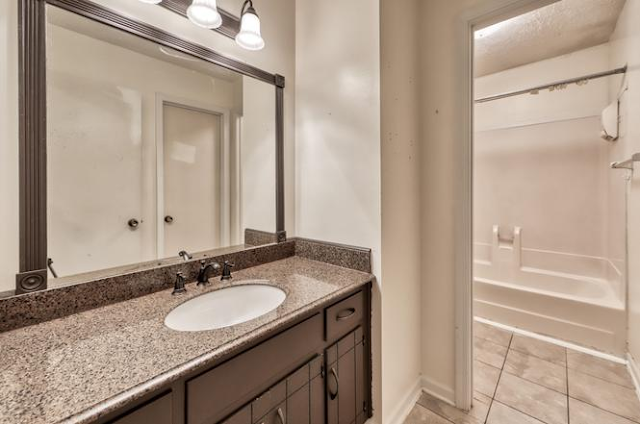 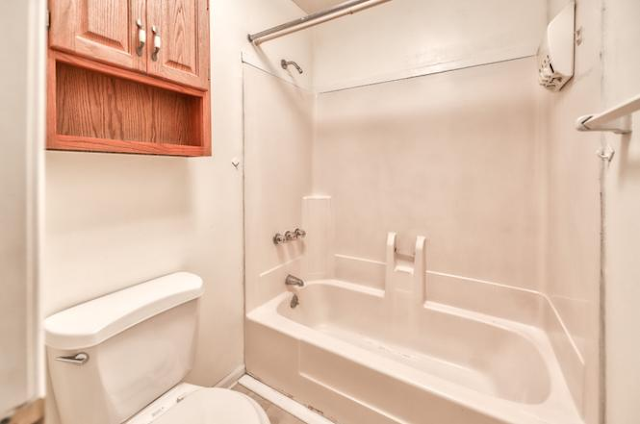 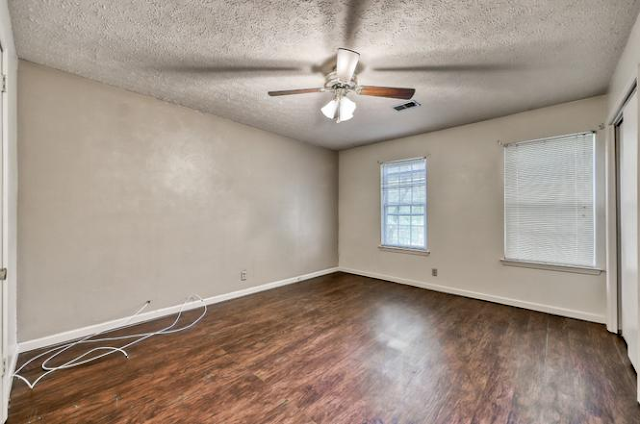 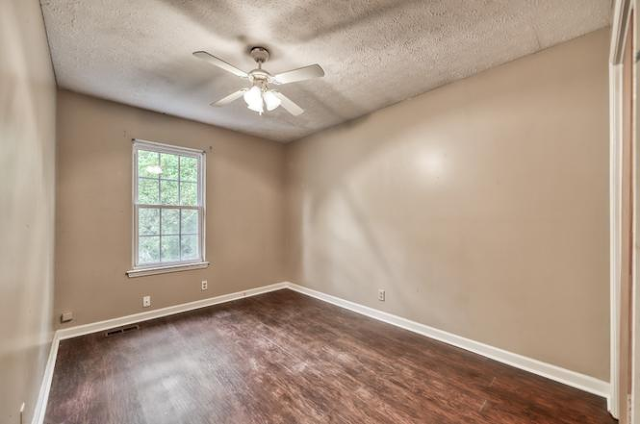 And the other back bedroom.
This room I did added the one wall
of 1/2 beadboard. I totally love this color
of walls. I framed out the window
also.  I had also framed out the one
in the living room and had I stayed the
other two bedrooms would have been done.
See the painted mouse
hole? There is a bench
and a tree with it.. 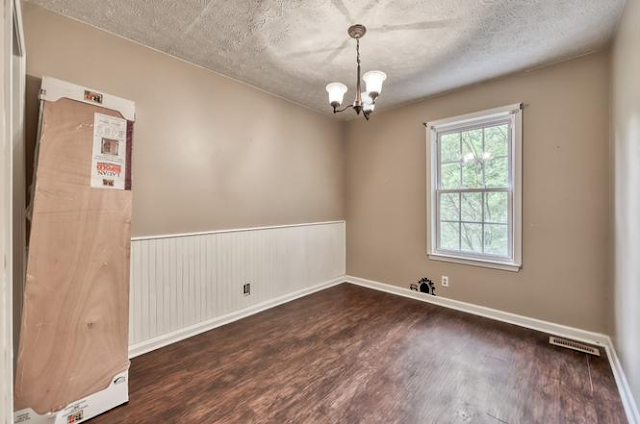 The screened in deck. I loved
this cause it was inclosed by
the fencing that seperated my deck
from the neighbors deck and on the
other side the trees from the deck.
No one ever knew you were sitting
out there. 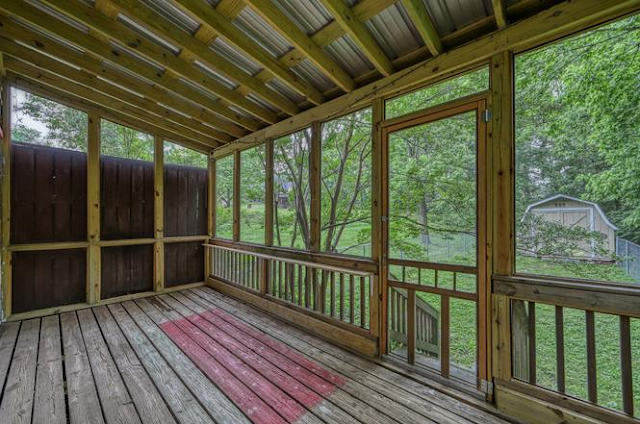 Aeiral view on the yard....check out
my colorful stepping stones.
Oh and the sunflower painting
on the shed!! 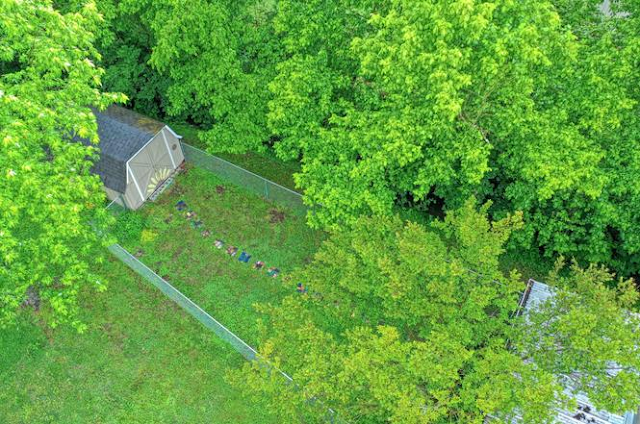 All those trees lining to
side of my place with the creek
running under them all. 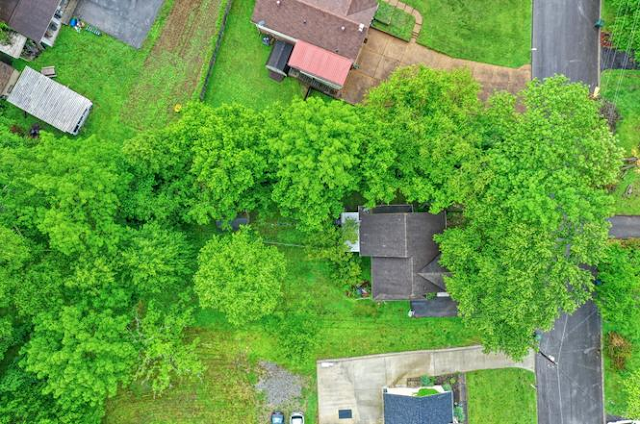 Here is the shed I had installed years
ago. So much great room. 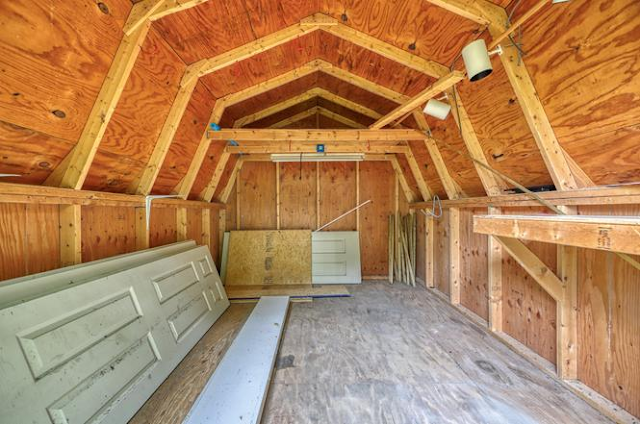 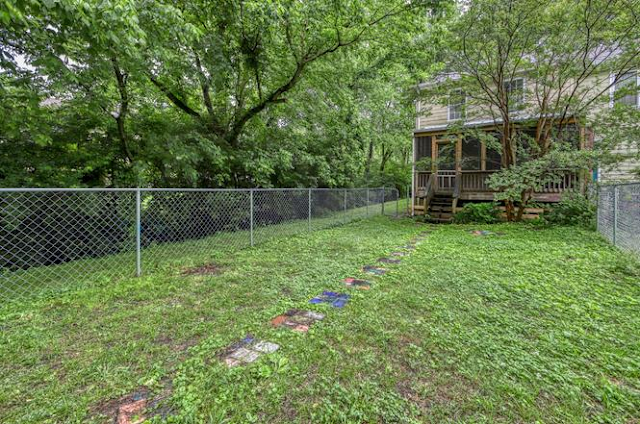 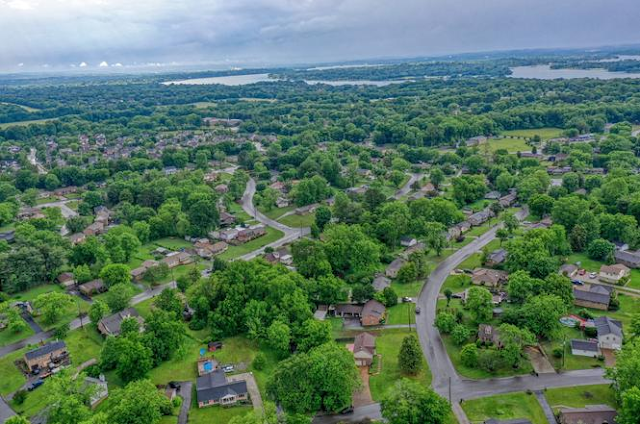 One reason I decided to blog about this
is cause I had a package that got delivered
over there a couple weeks ago. I drove over,
put a note on dudes door and asked them to call
me. When he called I went over to pick it up.
We had never met. He was telling me that
he thought he would be selling this
spring. He is really not happy with stairs...
He had took down the fence and he
installed tile flooring where I had
peel and stick. But the issue he is
really afraid of is...
the neighbors place.
You see Marica has never been on top
of getting repairs done. The wood siding
has become an issue over the years. It is an older
style of wood they used to use in the 80s.
It is like pressed partical board, sealed together with an
waxy type substance. When I moved
there is was not bad, but apparently this is
stuff that breaks down over time. It had
gotten to the point that I was having to
replace wood on the house every spring.
I was replacine, Marcia however was not.
I had my deck updated, however she had
hers torn down and at this point
not replaced. In 2019 I saw her once.
She has moved to Knoxville and is
living with her son and his family. I think
she is trying to decide to sell or not to sell.
She would have a friend come by every
so often and check the place out. In
2019 the friend came in the winter and
found a leak, the living room ceiling
had fell in. She had guys there fixing
and repairing but she never came home.
I was told by the guys fixing it that all
was repaired. In talking to the dude
that bought my old place he is really
concerned because apparently the pipes
upstairs leaked again, causing the living
room ceiling to fall in again. He said it
was not caught soon enough and the
house is a wreck, with mold growing
also. He is really concerned about that mold.
I don't blame him. Black mold grows and
travels. He said apparently Marcia is
in the process of sueing those that did
the work last time. But there again, if
you are not there to catch a problem
then part of the problem falls on you.
YIKES...so glad I am not
dealing with that.
Pam

Sandee said…
You have to take care of things or they go bad. It's a lot of work and expense, but so necessary. I'm glad you're not there to deal with this anymore.

Red Rose Alley said…
That's a charming house, Pam. You did so many things to it to make it look even better. I have that same screened in porch at my mountain home. I understand that you wanted privacy from the neighbor. I just left a bad situation with my old neighbor. The kitchen is huge, and so much can be done with that. Thanks for sharing pictures of the old house. I also wanted you to know that I posted pictures of all the snow we got last week. I know you couldn't imagine snow in California, but I'm living way up north, so we get lots of it, and it comes and goes until March or April.

Rhodesia said…
Sounds like you moved at the right time, I did not realise that it was an attached property! Stay safe and keep well, Diane
February 01, 2021

Brian said…
I agree, it sure looks very nice but it seems like the three of you like where you are at now.
February 01, 2021

Rain said…
I'm so glad you're not dealing with that too Pam!! :) Your kitchen was very lovely by the way. In answer to your question YES!!! I got your Christmas card and it was great! I wrote a blog post about the Christmas cards I received and thanked you there, also in my comments, but maybe you missed it! No worries, it arrived safe and sound! Thanks so much! :)
February 01, 2021

Liz A. said…
Good thing you sold when you did, but I'm sad for the guy that bought your place. It's not good for a duplex like that to have issues with someone not there.
February 01, 2021

Jeanie said…
You got rid of it at just the right time. I'm sorry the new owner isn't happy. I get the stair thing. At a certain age, you start thinking about that. But the real issue is the neighbor. Deferred maintainance is a bear -- I know from having been lax on that in the past and Rick let me know in no uncertain terms what a problem that is. She'll have trouble unloading that at a good price.

Ann Thompson said…
Your side of your old house looks fantastic. What a shame the other side was not so well taken care of. Sounds like you got it sold at a good time. I imagine the new owner will have trouble selling now.
I've often seen your rug in pictures on your blog and thought how much it looks like mine
February 01, 2021