Paintings Forgotten, Chalk Board and Deaths

The other day I was going through an album I started when I started painting. My teacher told me to always take a pic of what you paint. I also keep an album on FB for my paintings, I realized this one was not on FB. Not the best pic since it is a pic of a pic. 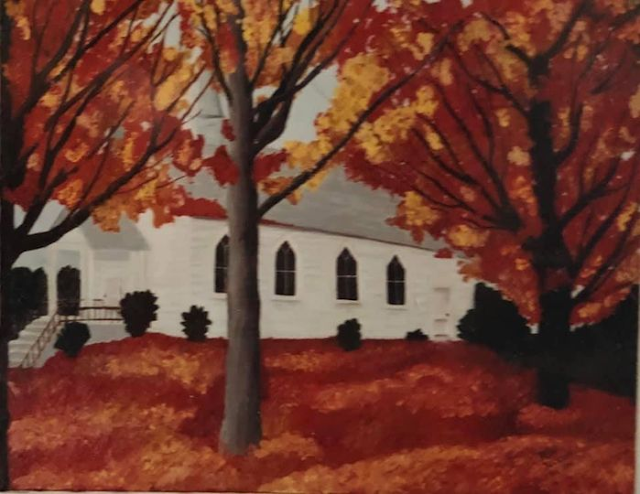 I painted this years ago. It is of a church in Johnson City TN (East TN) during the fall.
So I painted it.
Here is another pic of a pic.
I gave to a friend that loved wine, but failed to tell her NOT to frame under glass. 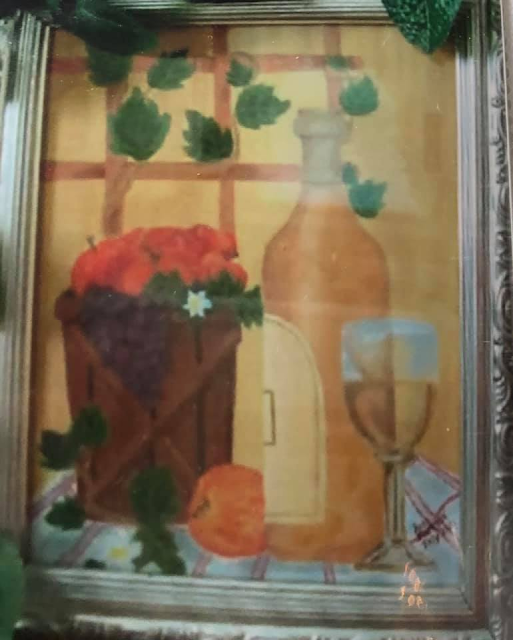 You don't frame oils under glass. I am not sure how it faired as
the years went by.
And another early on in my painting journey. 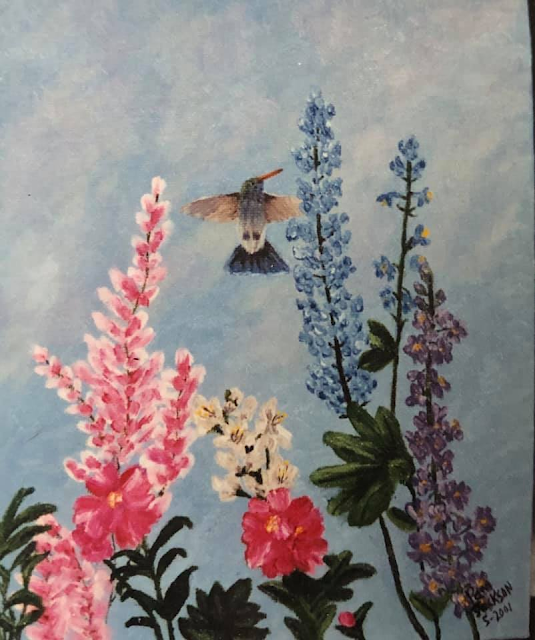 Years ago....and I do mean years ago, prob close to
10 or 11 I found this cabinet door piece at
Habitat for Humanity Rehab store. I had plans for it.
BUT
never did do what I planned.
A couple of weeks ago I pulled it out and decided to
work on it. So I cut a piece of board to close the
hole up in the center.
Then since it was a dark brown, sorry forgot
to take a pic, I primed it and painted it. 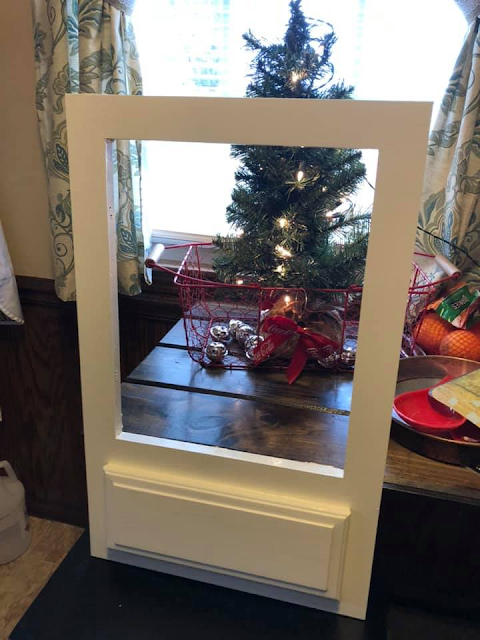 Oops, forgot to tell you that I also painted the board
I cut, with chalkboard paint. Once I had it all
painted, I nailed it to the back of the cabinet door. 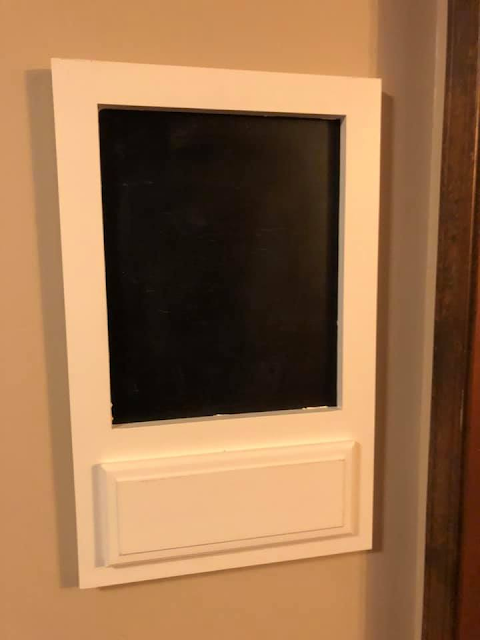 It hangs in the kitchen now. 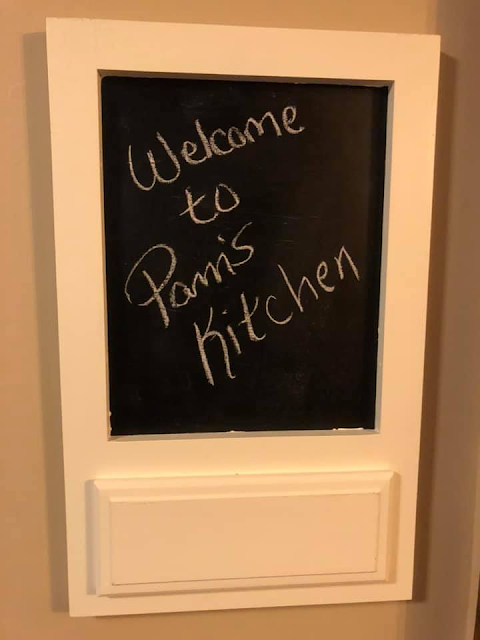 Keep in mind, the cutting of the board and
spray painting was done weeks ago.
The rest was done in the last two days
between hanging lights and putting up
Christmas.
So once I got busy with this project it took
a couple of weeks, but the thought came to
me all those years ago.
Caleb (grand) is 20, I was going to originally
make it for him!!!
A week ago I went to the mailbox and found a
card from Sal's mom. I had sent her a card when I
found out about Sal. She was just thanking me
for that and for thinking of them. She also sent
that little card with Sal's pic on it. 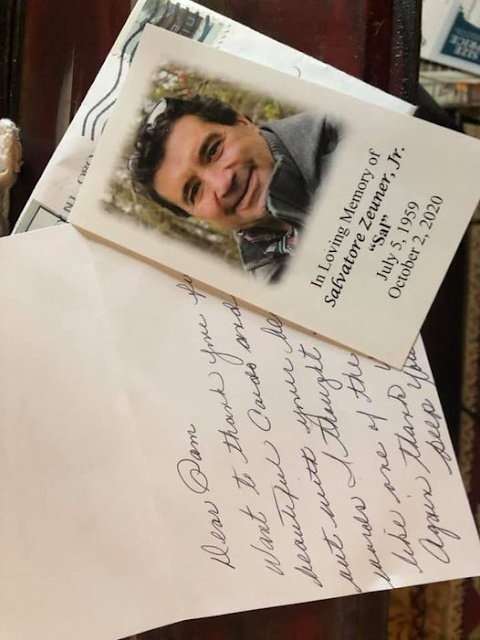 Still breaks my heart.
With that, another classmate past
yesterday. About a week ago he was doing
something in the garage, somehow fell and
was in the trauma unit at Vanderbilt Hosp.
He never woke up. He leaves two sons, a wife,
brother and several nieces and nephews.  I had
not spent anytime with John since school but we
are such a close group when we lose one we fill it.
(1978) 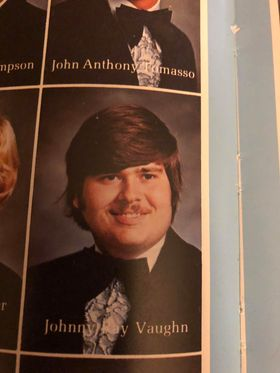 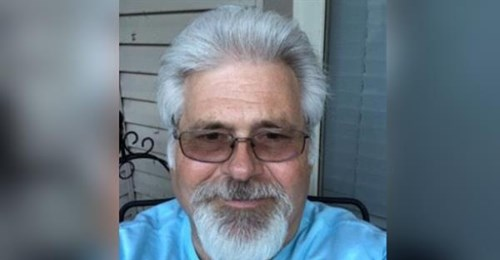 Brian said…
Your art is always so very pretty. We're sorry another classmate is gone, it is never easy when we lose someone.
December 01, 2020

Jeanie said…
I'm so sorry about the losses of your friends. It really hits home, doesn't it? I love your church painting.

Ann said…
Your paintings are all wonderful.
Sorry to hear about another classmate passing.
December 02, 2020

Sandee said…
You are most talented, but I already knew that from visiting your blog.

Sorry about your friends. As we age those that we know and love leave us. I don't care for it one bit.

Rhodesia said…
Love that frame. It is sad we are reaching an age when we are losing friends and class mates. Never easy. Keep well, Diane
December 02, 2020