Replies to Comments, Halloween around the Hood

The other day in my post I shared this pic. Darla over at

wanted to know if these were real legs. Yes, there is a sitting area up there but apparently this person decided sitting on the ledge and dangling the legs over the side. 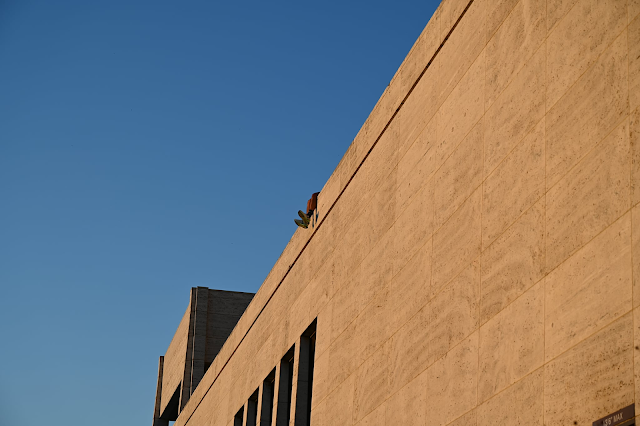 wanted to know if I meant a live game. Yes, my county was not doing that as a matter of fact my county was doing all virtual learning until two days ago, I think it was kindergarten up to 2nd or 3rd just went back to school. Next week another group will be going. But back to your question, my daughter and grands live in a county over an hour away and they have been in school since it started back. Games however did not start back right away, but when they started due to timing they only had enough time for six games. There were two of them cancelled due to that county they were going to play had too many cases of the virus. There were a lot there to support the middle school for that game but not so many that we were packed. We were able to stay six feet away from others but I was sitting right with my family.

Please excuse the way my cell phone pics look...I have been trying to take pics around the community of Halloween decor. Some by holding the phone up and just shooting as I drive by in hopes I get something.

I am not a fan of blowup any things. Although they seem to make some cute things for blowing up in your yard but when they are not blown up it makes the yard look terrible. 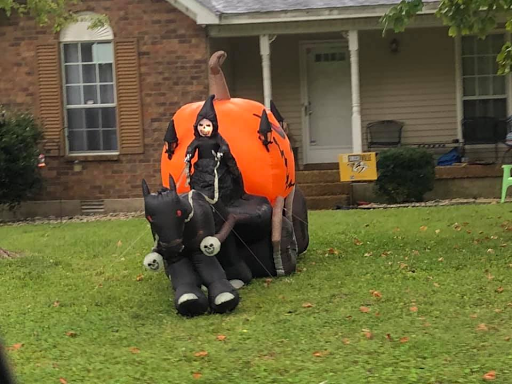 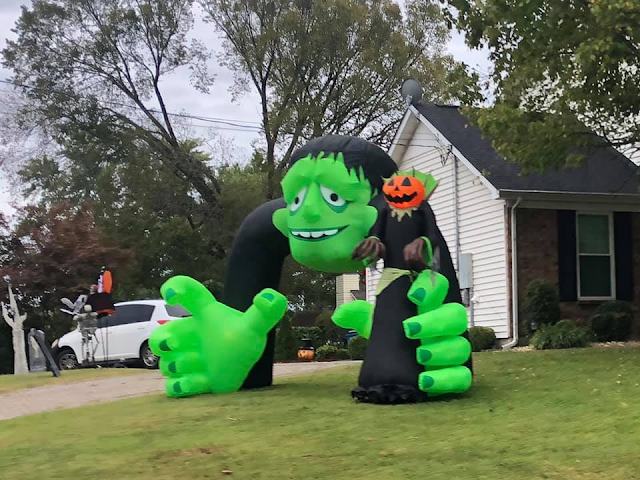 The two above are from another subdivision not far from me.
This one below however is up the street and around the corner. 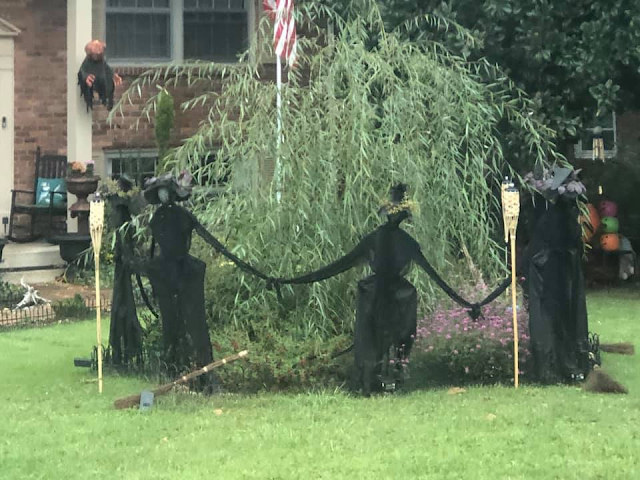 Here is another one from another subdivision. 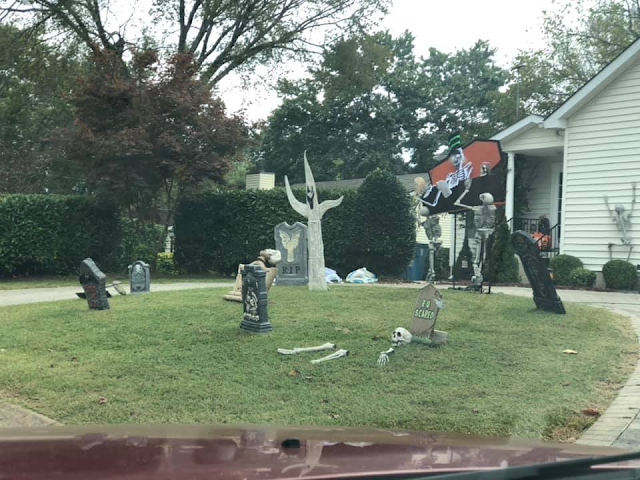 Check out the two skeletons in the back carrying the coffin.
In the same yard is this small skeleton riding the mailbox. 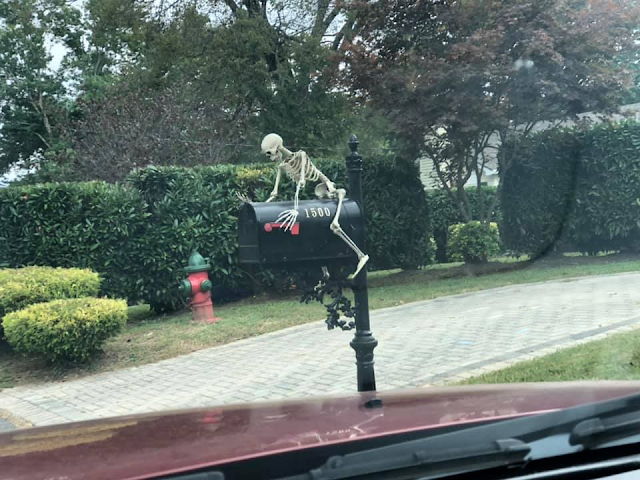 But in the front yard there is this...
so cool. 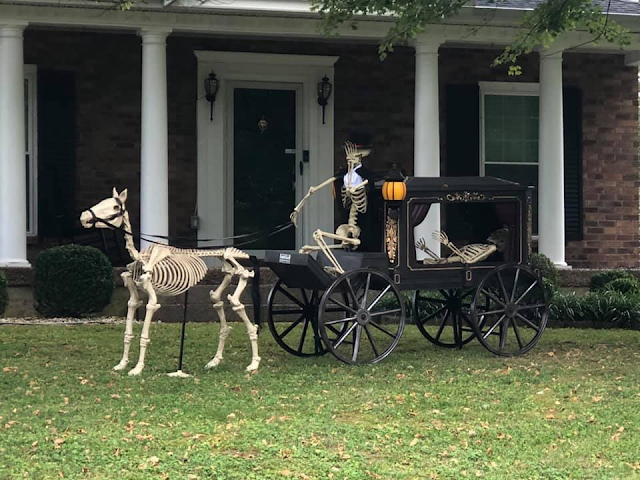 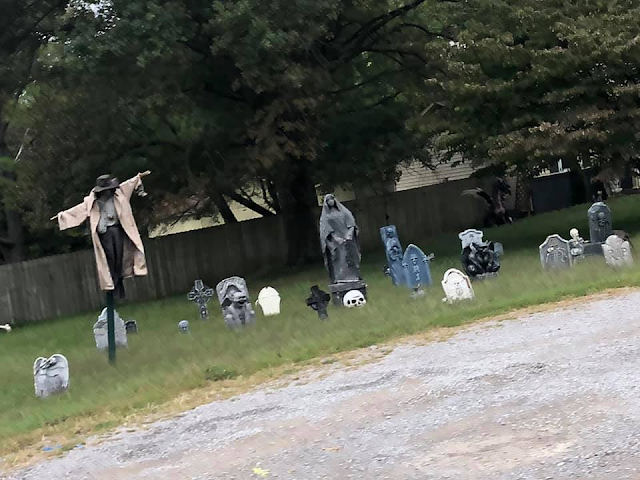 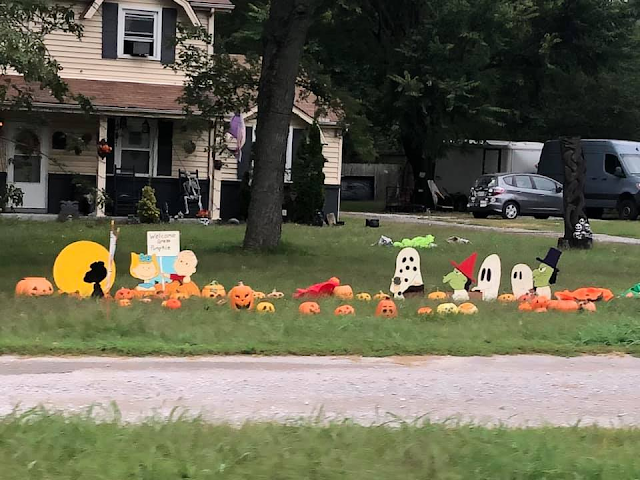 Being a fan of clowns I think clowns get a bad name at Halloween. But this is cool. 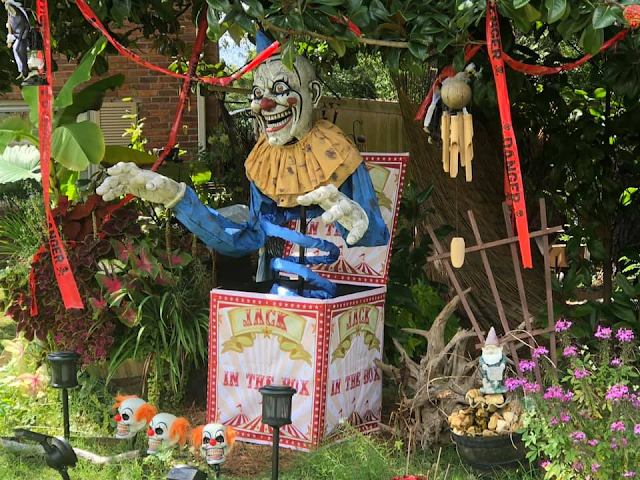 In the pic below, they have added another skeleton to the mix, It is climbing the fence to get out of the graveyard. 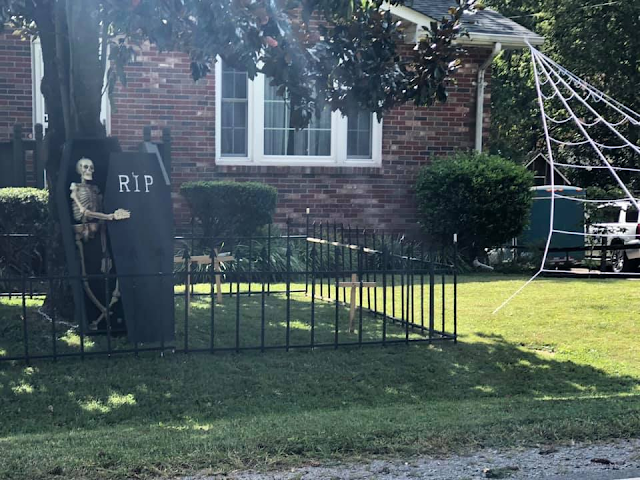 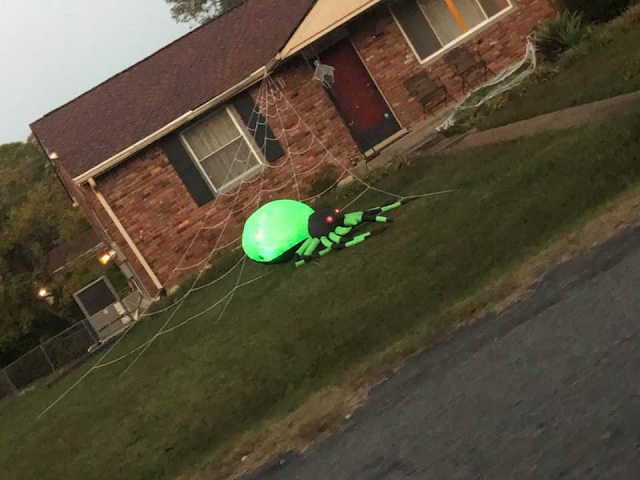 This house is down the street from me and the first time I passed it, it was dusk and I thought those skeleton heads in the yard were mushrooms....second take I realized not. 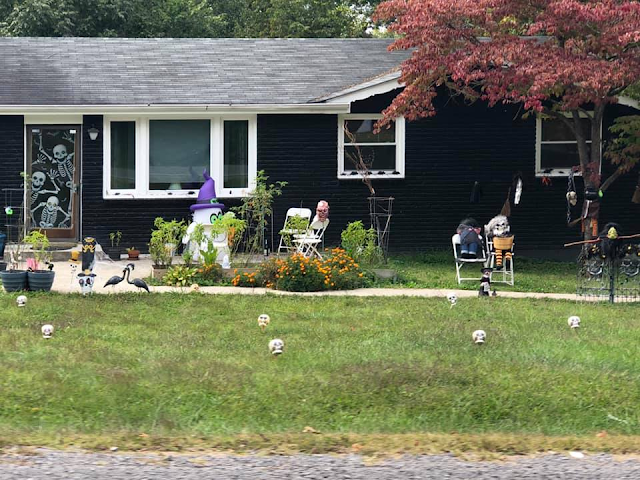 The next few pics are in one yard. 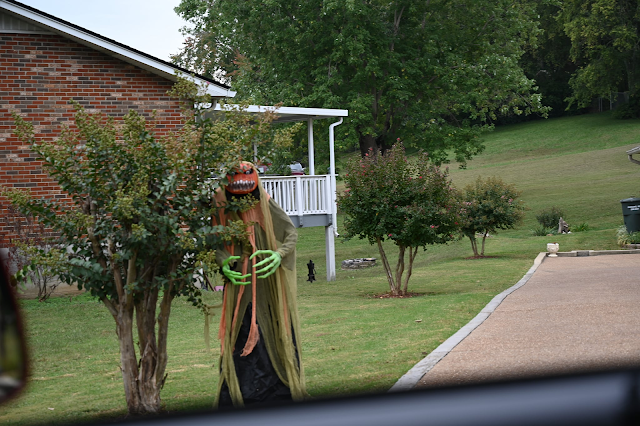 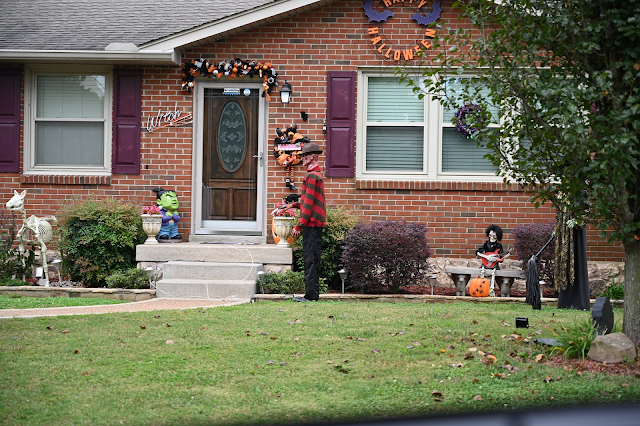 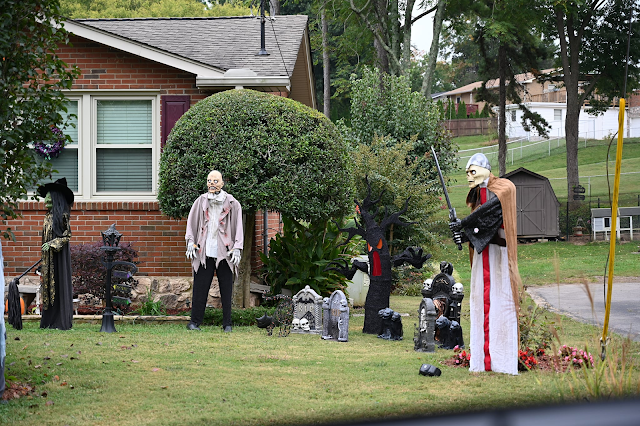 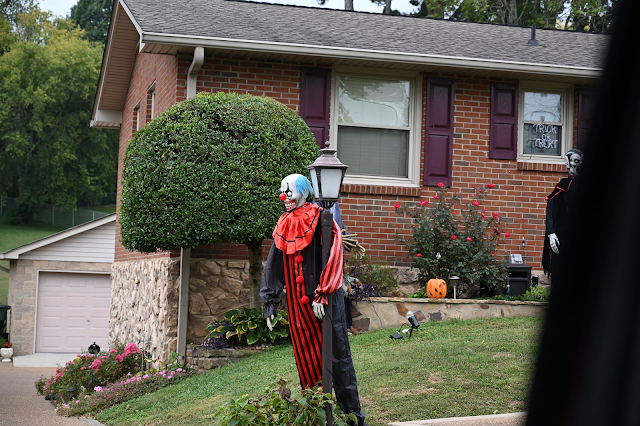 And yet again, the clown.
This house is across the street from the one above. 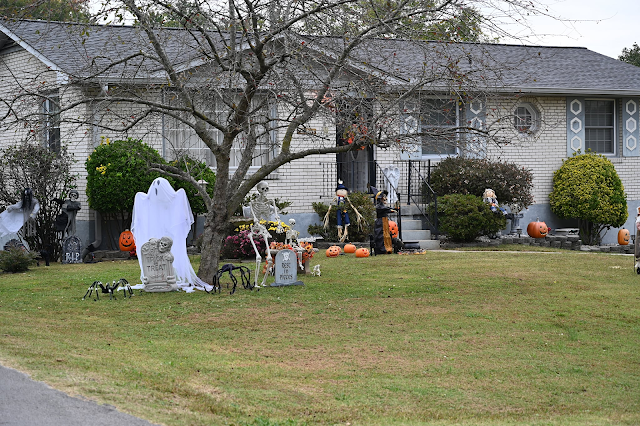 I rode out a bit further the other day and saw this...it has to really be my fave so far. Its wearing a mask. 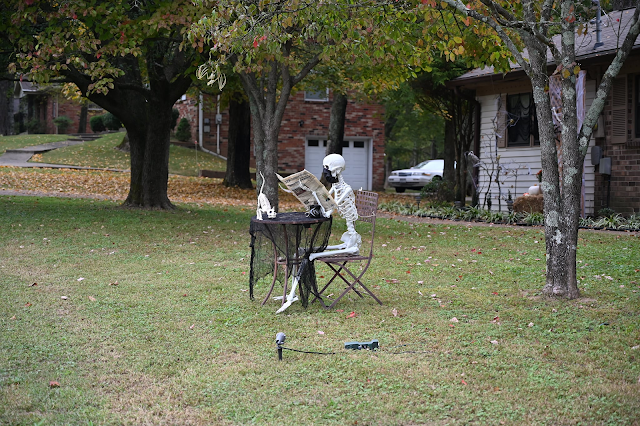 And across the street from the above is the one below. 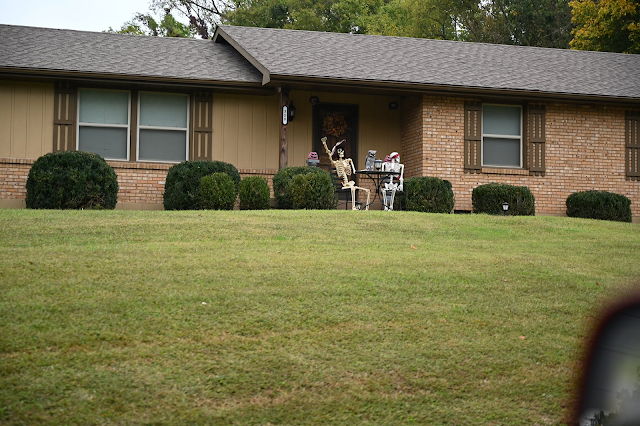 Now my decor.
It started this way. 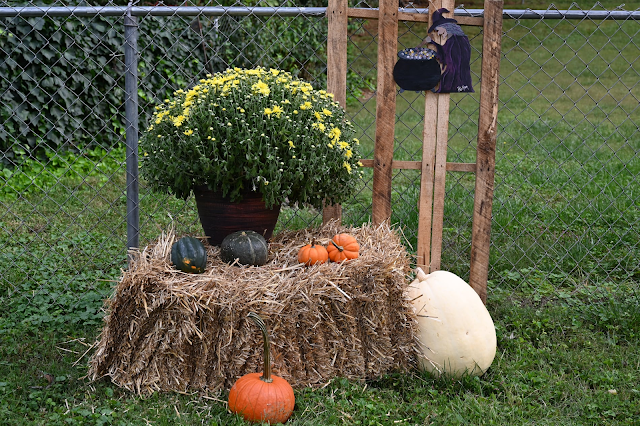 I added the basket that I picked up at Hobby Lobby for two bucks. 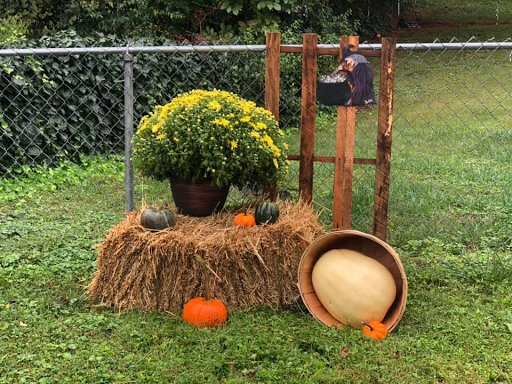 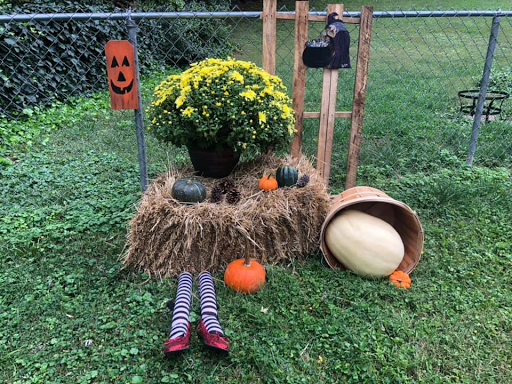 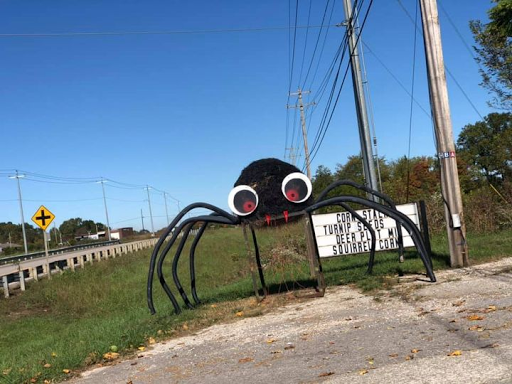 Yesterday driving down the interstate I look in the rear view mirror and saw that my skeleton was waving at folks behind me... 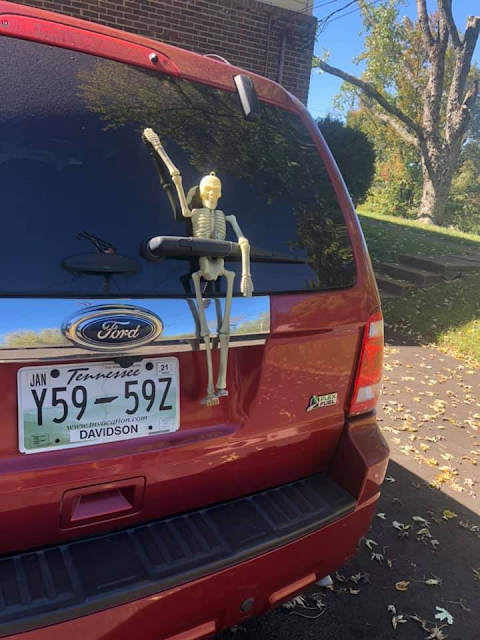 How does the decor in your area look?
Pam

Brian said…
Those are some interesting decorations. We hardly have any in our neighborhood.
October 18, 2020

Ann said…
I haven't been out and about much, only driving the half mile from home to work but I have seen a couple houses all decorated up. These are all really cool.
October 19, 2020

More Pics with the Camera 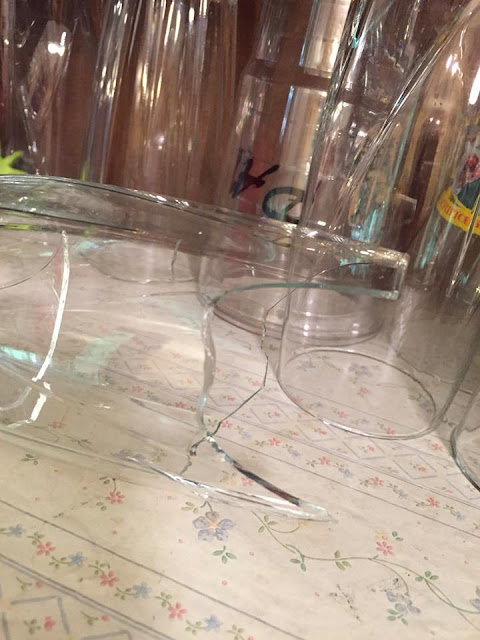 Like I said in other post... I just had to have the camera in  my hands and I needed out for a bit.
This is how Friday and Saturday  seemed to go~

Both days! Everything I touched I dropped, even a glass putting it up in the cabinet.
So getting out Sat. was right up  my alley!
Just so you know, I love to travel back roads.  I am that person that checks  the rear view mirror really fast to see if she can pull off  the road, swing in a drive or pull over on the side....RIGHT THEN!
That is how I get these shots! I am probably that driver some folks like to cuss at.
And I love rustic, or worn out, not lived in, lost looking, destroyed,  and sad looking places. 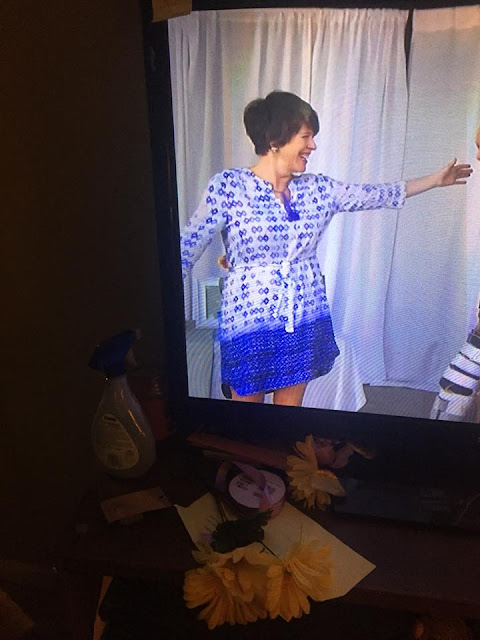 I like Hallmark Movies and the other day  was watching one while doing other stuff that I have seen many times. Could not remember the name of it but it is about a woman that goes home to help out the family on their tulip farm. Her name was Rose...
Anyway while dressing to go off I noticed this dress that Rose's mom was wearing. Thank goodness for being able to go forward and backwards on my tv, I was able to get this shot. Color is off cause I am shooting off the TV. But..it hit me, I have that dress!

This is the true color and this is my dress.

I thought that was really funny. Don't take much to entertain me!
The other day I went down town to  Centennial Hosp to visit a friend. Wendy is 45, I am 58...I started baby sitting Wendy when she was 3 months old. She was my everything for about 3 yrs  when they moved a little of an hour away. As you can see, we stayed in touch.
Anyway, Wendy is in the hosp. 2 weeks now. She has developed a rare form of pancreatitis,  brought on from gallstones. One apparen…
Read more