Crafts and Talents in Life

Back again today with what I have done here and there. To tell you though that my love of beads after making a beaded chocker grew later in life. I have about six of those plastic slotted containers full of beads. That is even after giving about five away.

So somewhere later in my teen years I got into rug hooking. This is a cool thing for teens to do. It is not hard to follow the patterns and you can do this while watching TV. 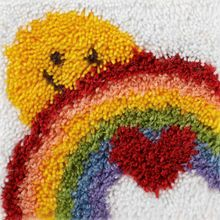 Lets not forget knitting. Yep, I went through a thing where every time I was giving a gift it was knitted house shoes. Just like the ones below. 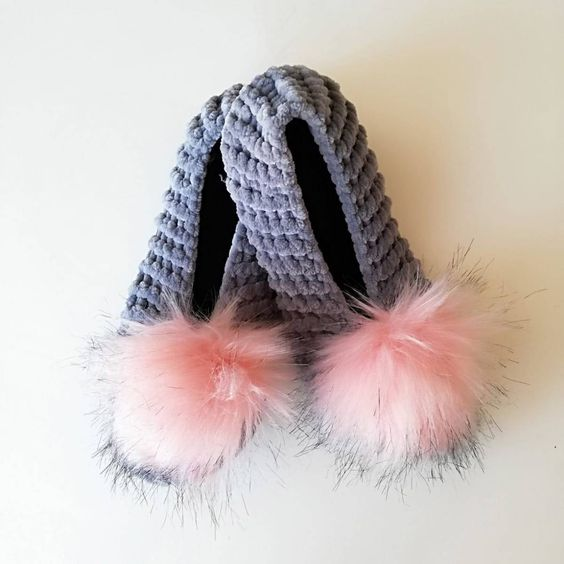 I learned this in the 9th grade. Was so excited to learn this cause my mom could sew and crochet but I learned something she could not do.
Next did come the crocheting. I made a many of throws. But as I got older I even made several from scrap yarn. It was a basic double stitch but I would pick up a small ball of yarn and GO. I would use that up then I would pick up another color and go with that. It was a scrap throw.
Late in my teen life I learned to macrame. There again, gift time folks got plant holders. 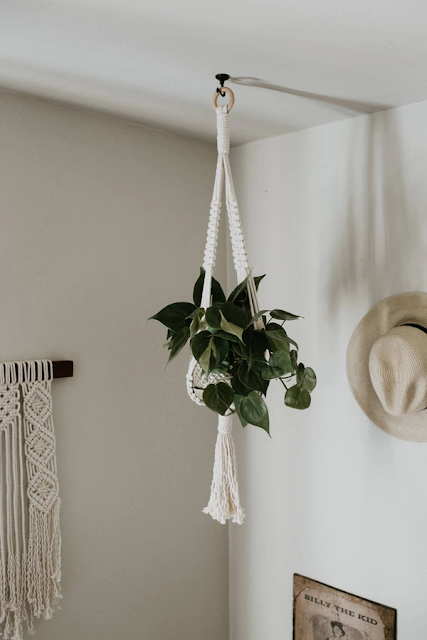 Or a towel holding owl. I usually did a piece of of thin limb or stick across the top with the hoop at the bottom. From there I advanced to the stick at the bottom also which at time that became just a wall hanging. 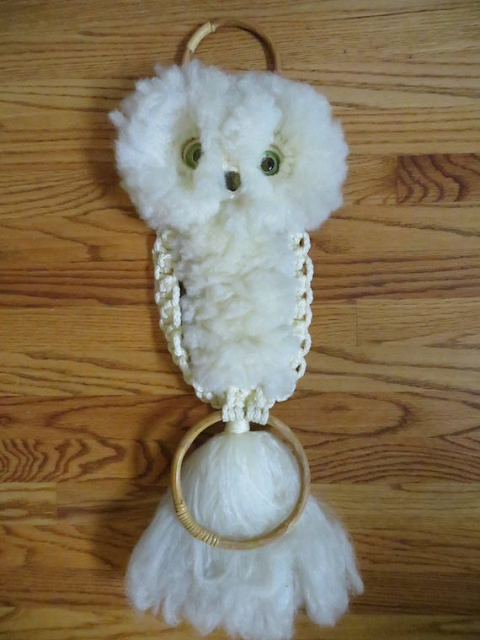 Then all went crazy. I was making hanging tables and hanging lamps.
In the 11th grade I joined an art class to take up an elective class.
And I painted the below pic.
This is of the bridge at Big Springs in Cedartown Ga., my moms home town. 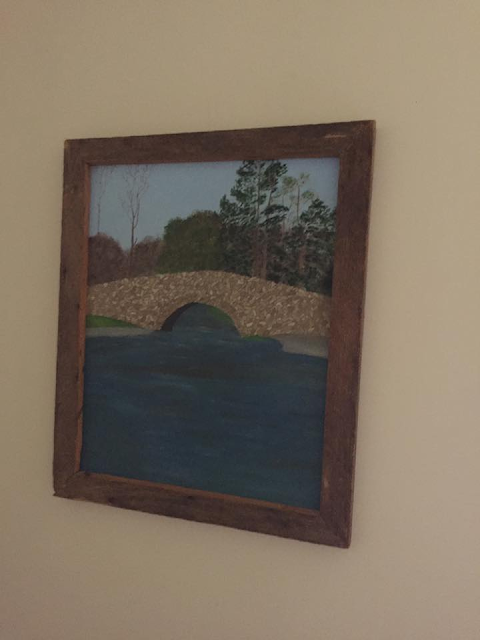 I painted one more that year also. They were done in between making things with clay and stuff.
Out of school....never picked up a brush for painting anything like the above. But since I was young and married with a kid and money was tight I started making Christmas ornaments like the one below. 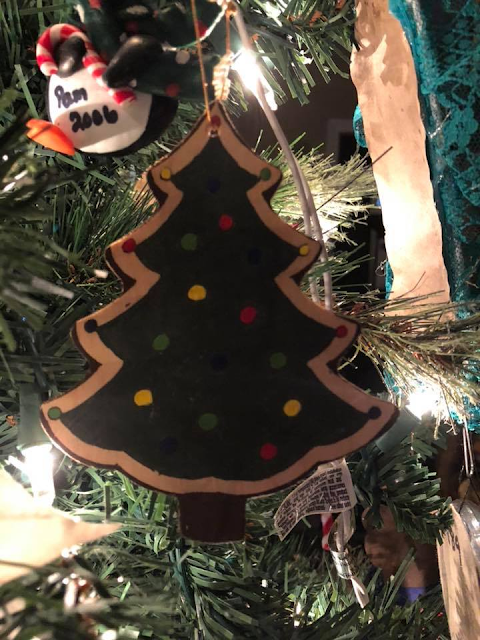 I was also making crafts like the stuff below. Only I went crazy with the wood cut outs and tops making small canister sets and things. 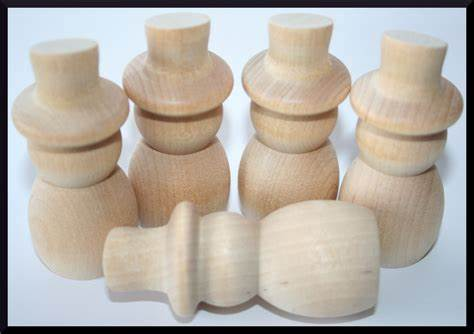 I did advance in my Christmas ornaments but it was not a money thing then it was a traditional thing. I started making my kids cross stitch ornaments.
This is one made for me one yr. My kids were given theirs when they moved out. 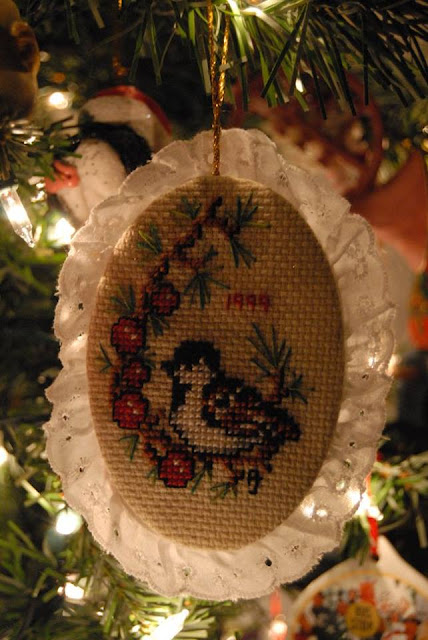 Oh my and if I did not have enough to do I started including family members in the ornaments.
THEN
I added friends.
This was made for my niece Holly. 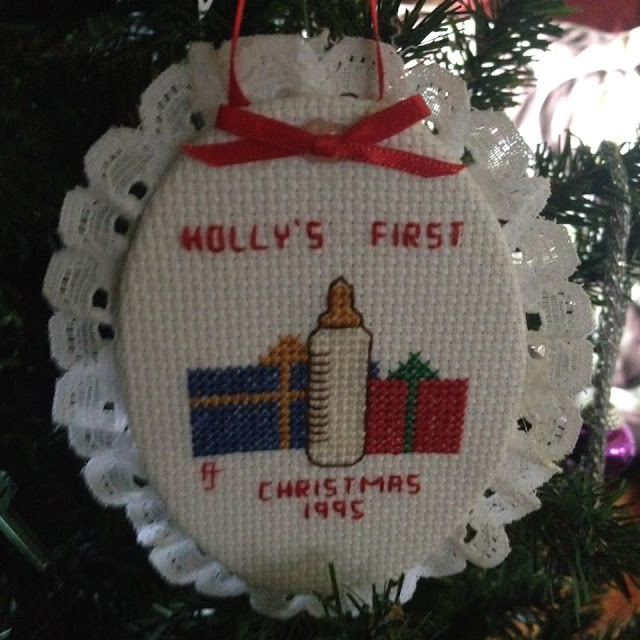 I ended this tradition when I had a total of 20 some odd ones  I made in one yr. That included three nieces, three nephews, one great nephew,  two kids, two sis in laws and two brothers, and tons of friends. That is cross stitch time and then putting them together to look good on a tree. Few years later I started painting my ornaments but it included brothers, sis in laws, my kids, my grands, nieces and nephews.....but 2019 I even stopped that. That of course was my bad year.
I have not started back.
Moving on.....as the years went on and like my coloring (you would have to have read my post yesterday to understand that statement), I did not want to stay inside the lines or the box so I made up my own cross stitch pattern.
BELOW. 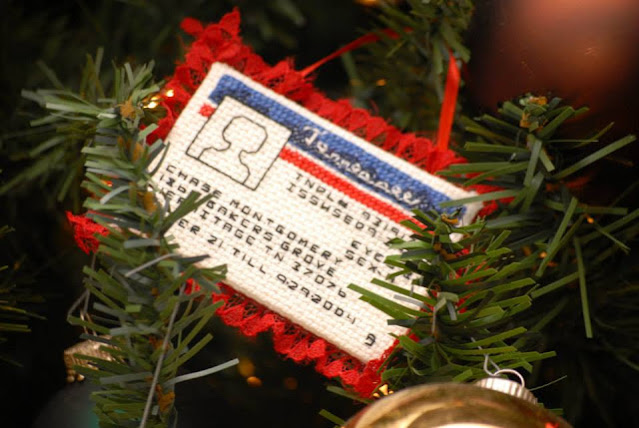 When did my painting come back, a LONG time after I stopped once out of school. I started sketching, just messing around and mom said I needed to start painting. She wanted me to check into JoAnn's or Michaels for paint classes. I said I would cause it sounded neat and it would give me a much needed outlet. But...I did not. One day leaving my brothers home she saw a bunch of ladies going in a house two doors down carrying canvas. Well of course she had to march down there. She found out a lady taught painting at JoAnn's and Michaels but twice a week she did it in her home. One week day and one week evening. Evening was all that would work for me. So to narrow it down, I learned at the age of 42 I could actually paint. I wanted to give mom my first one so I picked this out to paint. It hung in the dining room from then till I was 60 (last yr) when I took it home. Now since I am back here it hangs again in the dining room but on another wall. The pic I showed at the front of the blog in my moms home town I painted again. Only a smaller size and in oils and it is beautiful. I have not hung this one back yet cause I have not decided where to hang it. 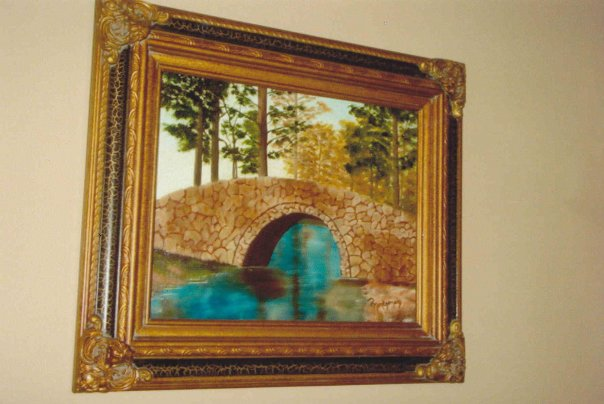 Can you see the difference in the first and the 2nd?
I will cont this tomorrow...
Pam

Sally said…
OK Pam
I've about had it with you!
I don't think there is anything you can't do. Makes me feel like a moron.

Of course, you know I'm kidding with you. I brag on you all the time; you're like a miracle maker! When I see all that you do, I smile all over. Thank you for sharing your talents, Pam.

Sandee said…
You are most talented. I have to pay for pretty things because I don't have a crafty bone in my body.

Ann said…
So are there any crafts that you haven't tried? I've tried quite a few different ones but there are still plenty that I've never done.
October 27, 2020

Christine said…
You are so creative and an artist really!
October 27, 2020

Liz A. said…
I still have a couple latch hook projects I did as a teen. My father did macramé in the '70s/'80s. Both seem to be coming back into fashion, at least through craft stores and the crafty things I follow online.
October 27, 2020

Jeanie said…
I think we who like to make things try out lots of stuff to see what fits and moves our hearts. Yes, tried them all!
October 28, 2020

Darla M Sands said…
Oh, I remember seeing many of these amazing works from past blog posts and never tire of seeing them. That cross stitch pattern you created forever amazes me. As for the bridge, I think I see the difference with the oil paints bringing more warmth to the painting. They're both lovely. Be well!
October 28, 2020

Lowcarb team member said…
You are such a creative person, lovely :)

Sally said…
Just checking in on you. Hope you're doing okay, Pam.