Cake/Wood Burning/ Hat / Who I Am

December 20, 2018
HAHA....was on FB this morning and here is a
memory that popped up from my days
at the TBI.
I was not only wearing my Santa hat but under
it I had deer antlers. 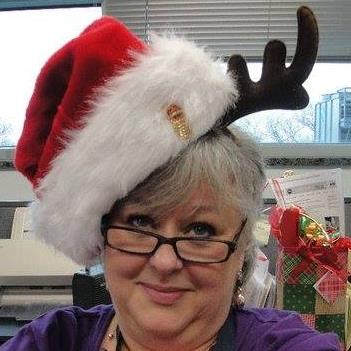 Check out that chucky face!

My angel. She adorns my tree every yr.
She came into my life at a sort of
wicked time for me.
I was going through a divorce, ex would
not leave the house so we were still living
together and I needed to get out of the house.
With that, I started selling Christmas
Around the World - House of Lloyds.
She was in my starter kit to show
as a demo. That was in 1992 and like I
said, she goes up every Christmas on the
top of the tree. 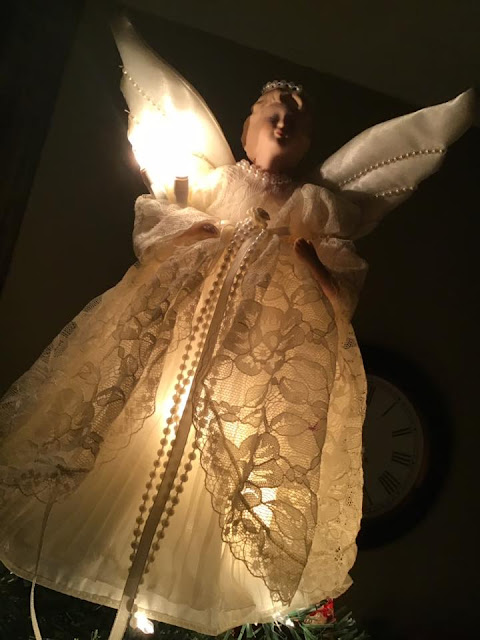 When I was selling CATW
I had stickers on each piece so that
the price and all the info was there for
me to go by. Look what is still on
my angel. 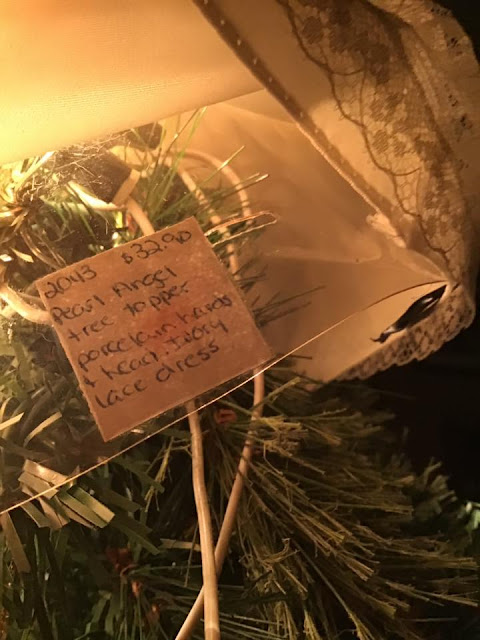 There was also in my kit a clown ornament.
I love clowns! 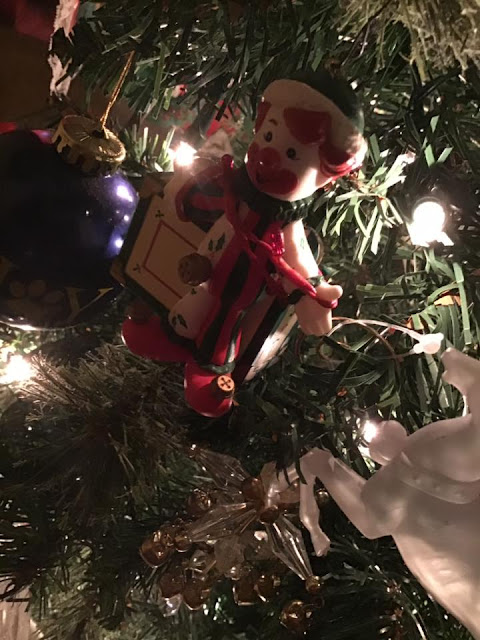 Same thing...info is still on him. 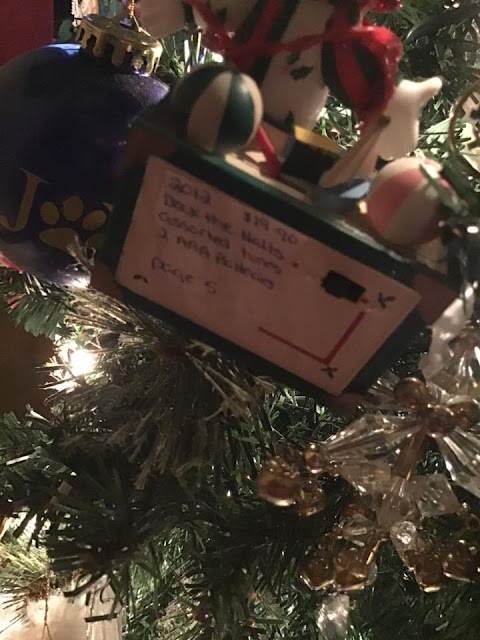 I think I have pretty much gotten rid
of the rest of my kit. Amber (daughter) has
most of it now.

I started playing around with my wood burning tool
the other day. I purchased it months ago.
What better time to start on next yrs ornaments? 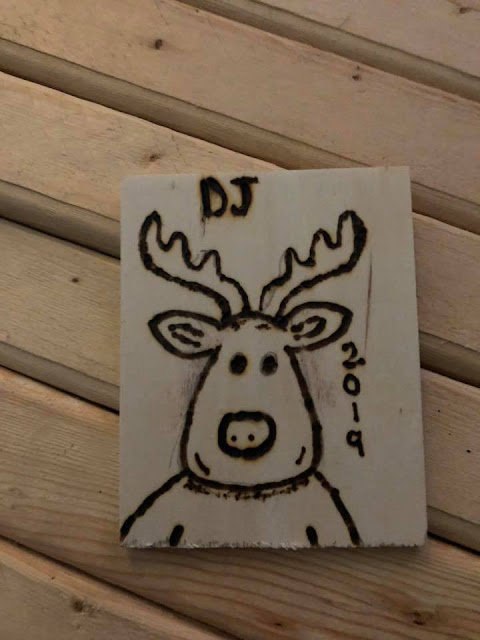 Not done with it yet. I might hit one or
two spaces with paint or maybe just
run some stain over it.

I love playing with it and yesterday
morning I made this. On a log from
Amber's wedding. Yes, I still have more
logs to play with! haha 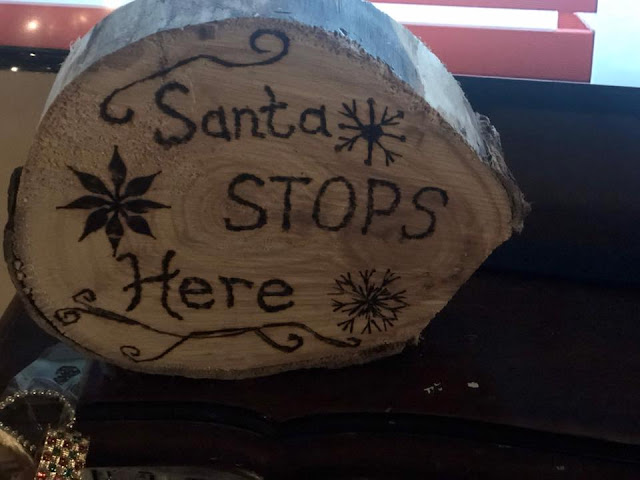 Since I am giving most of my stuff to Amber,
I gave her the log.
Matter of fact yesterday was her bday.
She turned a whopping 38.
I got up at my normal early hour and baked a
cake. Let it cool and decorated it for her. 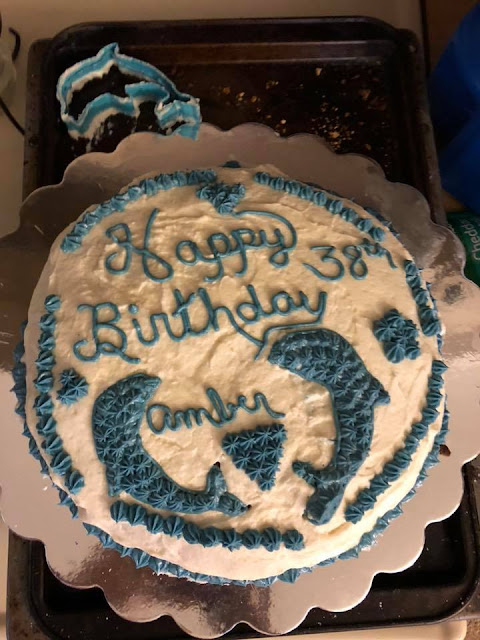 She loves dolphins.
I drove up, got out of the car and
tried to light the candles I put on it before
going in the vets office but the candles kept going
out. A sweet postal worker was there and just
dropped off the mail so I went to the door
and he helped me light them again, opening the
door for me so I could go in singing.
Vet Dr. King (Ambers boss) and another lady
that works there started singing with me. Talk about
surprised! I love it.

I felt pretty decent yesterday so later in the day
after going to the barn to feed I made shortbread
cookies and a toffee. I have never made toffee before
but Pinterest is a great way to get the directions!
Although it called for pecans on the top, I was not
paying that price so....I topped mine with broken up
and crushed hazelnut pralines! Probably...it called for
roasting the almonds on the bottom layer....yep, well the
directions had whole almonds and I broke those up too...
and apparently in tiny pieces they don't need to roast
as long as it called for. Its okay, but those almonds
are toasted a bit too much. 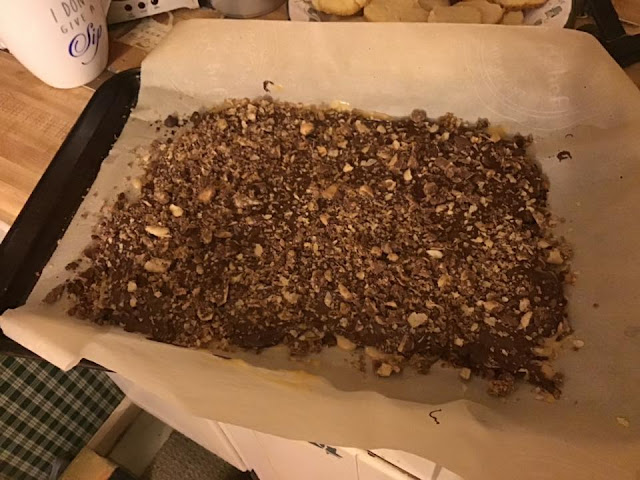 Taking this and cookies to my brothers house
along with piggy's in a blanket.

Okay...I just had to share this laugh I got the
other day. I went to McDonalds for breakfast, something
I never do but I was hungry. Sitting there in line
I read, " Better breakfast anyway you crack it"....
then I just so happened to look up and realized
the glass screen was cracked!
haha...its the little things I find to laugh at! 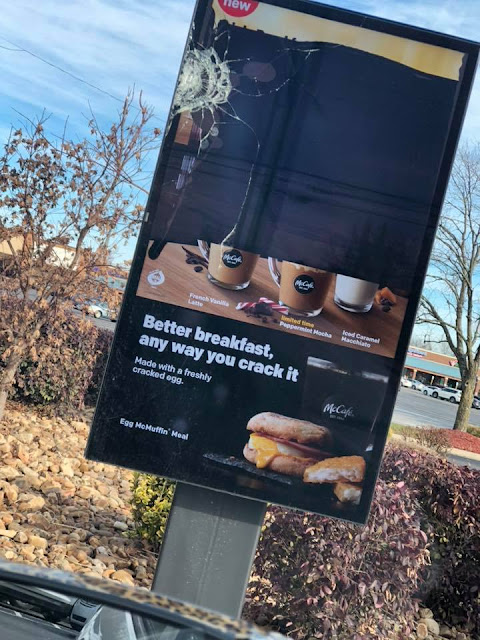 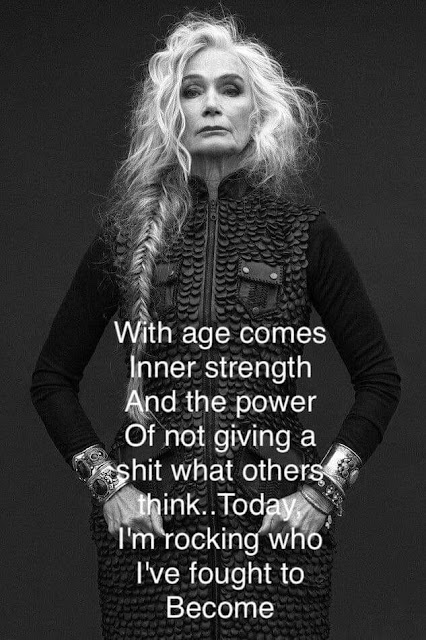 I have never given a
SHIT.
And I love who I fought to become. 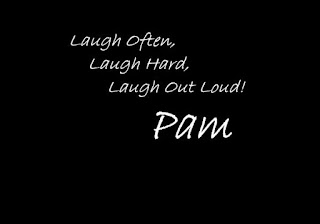 I have never given a shit!
And I love who I fought to become....

Darla M Sands said…
You did a lot! I hope you're not paying a heavy price today. ~hugs~ I cannot imagine going through a divorce, let alone living together during the process. It reminds me of "War of the Roses". ~grin~ So glad you didn't suffer their ending! Be well, my dear.
December 20, 2018

Sally said…
I love how you've become too, Pam!

Never made toffee, but have the kitchen filled with ingredients for things I want to make. :)

Glad you felt better yesterday. And, girl, you're going to town on that wood burning. I love it!

Sally said…
Oh, and I love Amber's cake. I know she was thrilled!

Liz A. said…
Yes, this is the perfect time to start on next year's Christmas. Provided you're done with this year's. (Some of us are still working on last year's... :-O)
December 20, 2018

Ann Thompson said…
I never sold Christmas around the world but I think I had a couple parties. I know I bought some of it but don't remember what.
I need to get my wood burning tool out and play with it.
December 20, 2018

Sandee said…
Oh that cake looked so very good. It's not dinner time yet and I'm hungry.

I love your hats. A lot.

Rhodesia said…
Seeing that top photo and how you look now is incredible. You have lost so many years and you are now so pretty. Take care Diane
December 21, 2018

Lowcarb team member said…
Love the angel on your tree :)