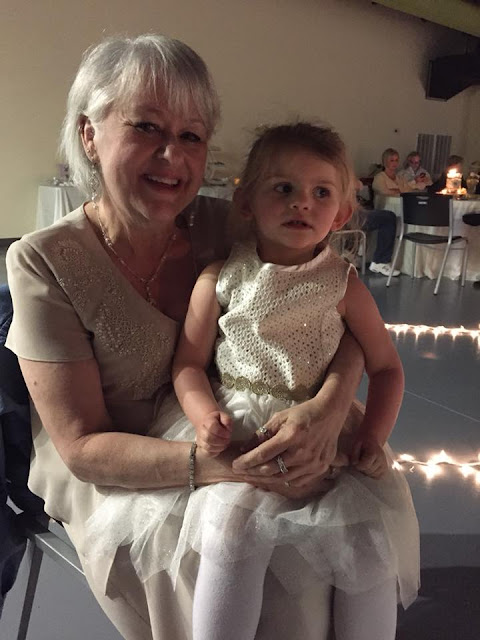 HAHA...
COMPUTER problems!
YUCK!
My laptop had acted silly a couple
of times in which it would boot up
but the screen would not come on.
I would shut it back down, set it aside
for a bit and then try again. It always
came back up...
UNTIL the other day!
It's booting up, screen just is not
lighting up.
It was suggested that I remove
the battery and  put it back in.
Even the internet suggested that.
Well on ACER laptops the WHOLE
back has to come off. I sit and unscrewed
all those screws, went to lift the back off
only to have it stick in one area. Being a afraid
to pull on it I put it back together.

The yucky behavior of my laptop
took place
on Thursday (at this point, I think
it was Thursday)!
Anyway...I have another older
Acer that I had lent
Caleb my grandson. Since he was not
uing it I requested
Amber bring it to her work on Friday.
She forgot but
did remember today so I am on it now.
Still needing to have the other one fixed.
And lets not forget to
mention that I have
a desktop but it is a 2008
and I only basically use that
for editing photos.

Anyway....if you missed my intro...
I'M BACK!
And I have been somewhat busy with
small little projects.

One being that I wanted a rug on my deck.
A
PAINTED
ONE
of course!
Being that my base of the deck is weather
worn the paint was soaking in and falling into
the grooves the paint was not covering
like it would on new boards.... BUT I love
it. The weathered boards giving
a well worn look to it. I hit it with some green
then a beige. I then stenciled some areas and
added the fringe. 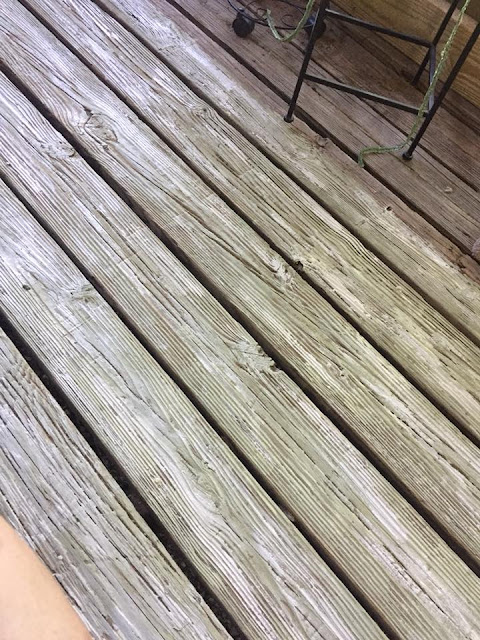 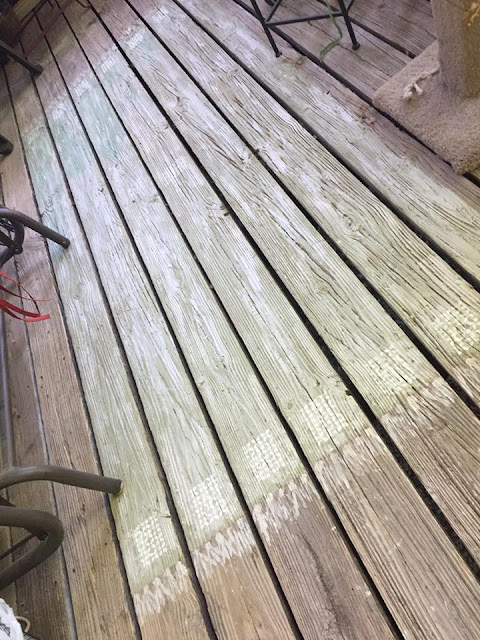 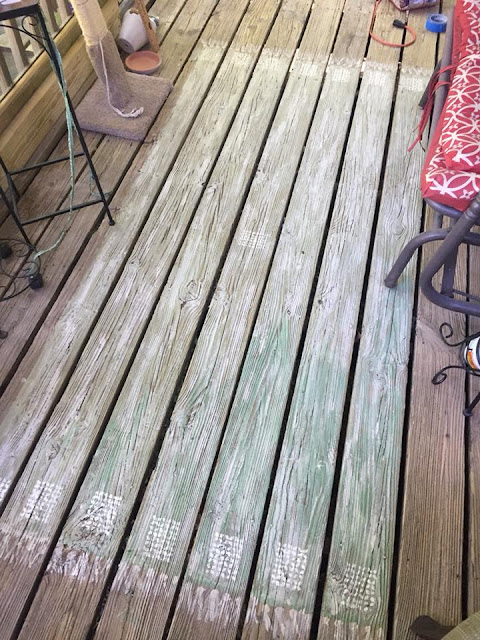 I still have yet to spray it to seal it...knowing
that it will probably not last long at all...
But I don't care
I LOVE IT
this way.
So what do you think of it?

While on the subject of the deck I
thought I would share the whole
thing with you since you hear about
me and the babes being on it all the time.

This is where, believe it or not, I curl up
and take naps. I lay on my side, bending my
knees and I sleep so well.

Course Dakota did a photo bomb! 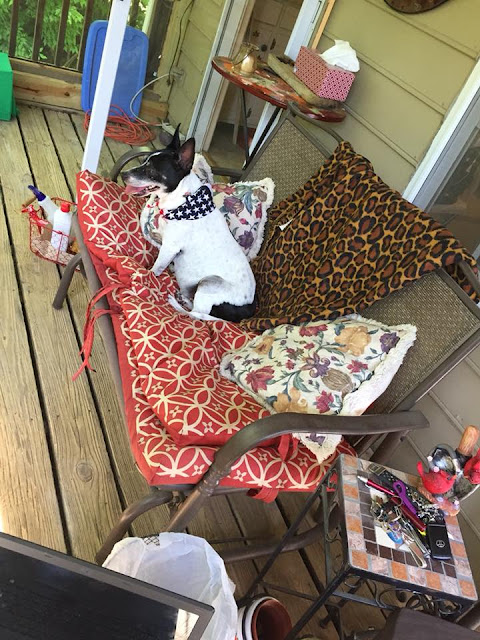 Next to that is my chair. It did sat
across from the glider but I love looking
out into the yard so I moved the glider
down and put the chair on the side of
it. 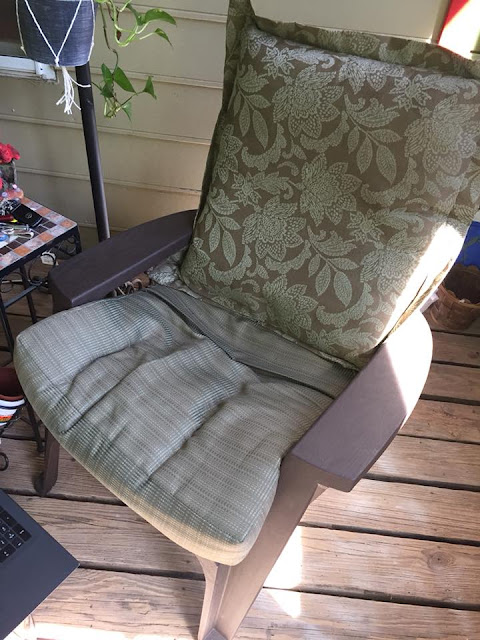 You can see better in the pic below
how they sit side by side.
Kitchen window is behind the glider. 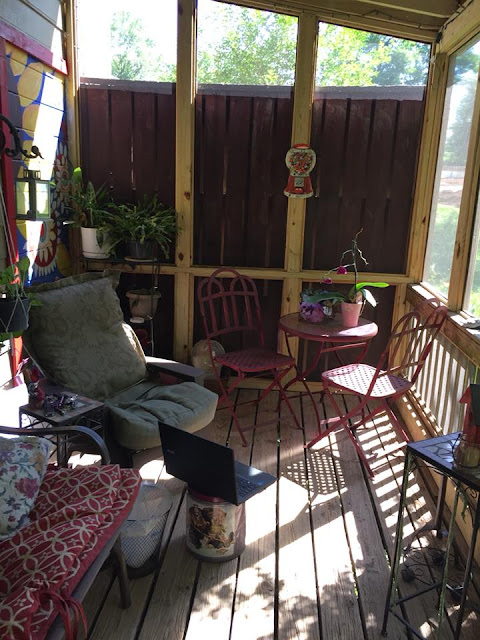 Also in that pic you will see the far end
of the deck. There is a divider that separates
my neighbor and my deck.
If you look hard you can see the painting
I did on the wall where the storage unit
door used to be before I had it sealed up
and a door cut in the pantry to access that
area better.

Here is a better shot with a streak
of sunlight covering most of it. 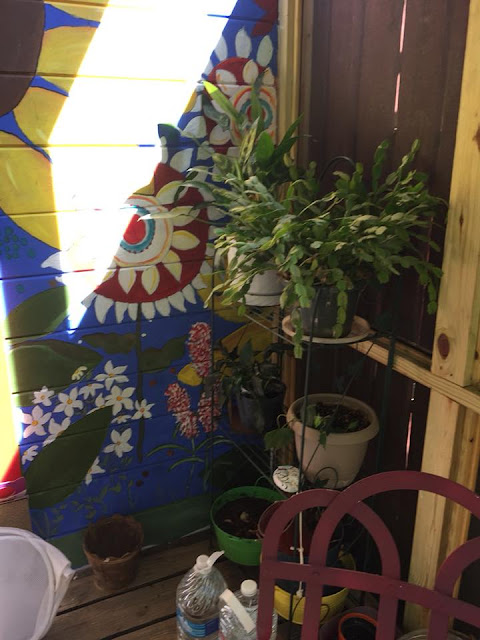 It is a narrow deck  but I still have
all the room I need.
I even have my lunch/dinner table....
which today serves as a painting table.
I have been working on crafts. 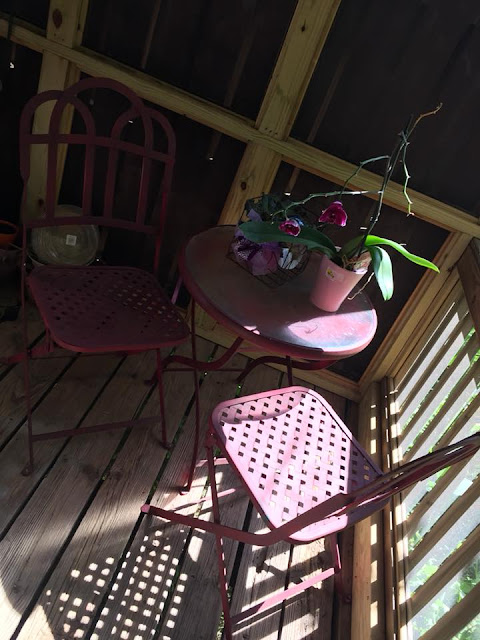 Course I just leave Lily's perch out
these days cause she is never inside
to enjoy it in the window like this past
winter. She goes straight to the back door
when I get up, I open it, out she goes and I
leave it cracked for her to come and go. 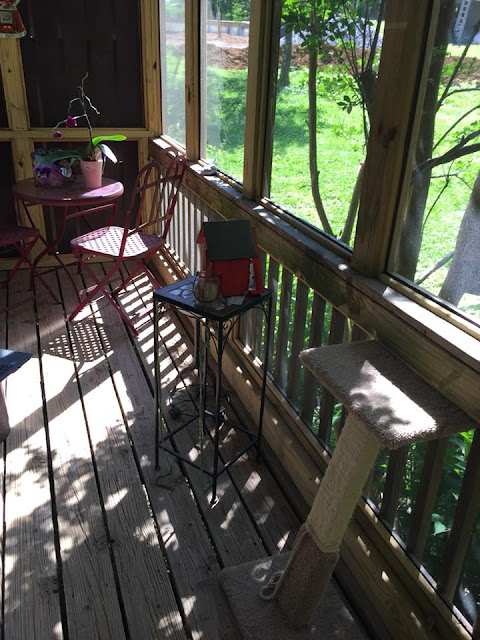 The other end of the deck does not
allow a lot of room for things since
the deck screen door is on that end as
well as the door to the kitchen.

But with that I have Lily things! HAHA
The grill used to sit there in the corner
and Lily perched there to watch the birds
on the creek. First time I fired
up the grill I became
concerned with her jumping up on it while
it was still hot, so the grill went to the
backyard off the deck and I got a cover
to protect it.

But as you can see, Lily has her
t-shirt box for getting in
(green item~ PINTEREST IDEA)
and the directors chair I was going to
make a suitcase stand with became a spot
for Lily to lay. I placed a board on the
bottom 1/2 of the directors chair and
one of Dakota's doggie pillows. 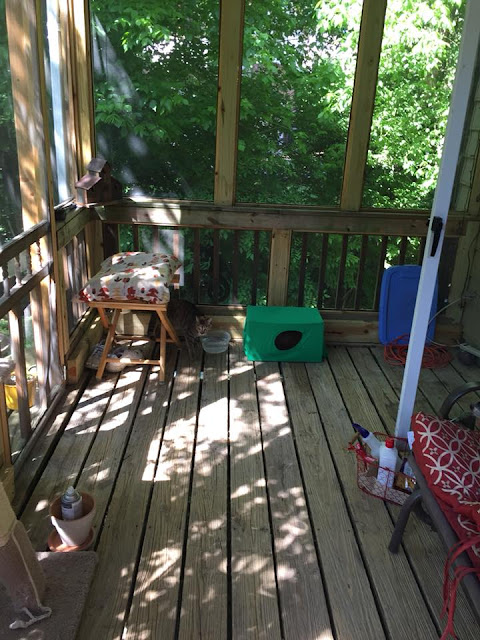 And there is the tour of the deck.
I used to live in the glider when I was
out there however after purchasing
the newer chair and removing the first
two I had out there (now in the yard) I
use the chair more....with that said, I
have to watch my seat so to speak cause
if I get up I might come back to a cat
or a dog in that spot.

Yesterday, the 28th was my son and
daughter in laws anniversary.
Happy 7th anniversary
Cory and Britney. 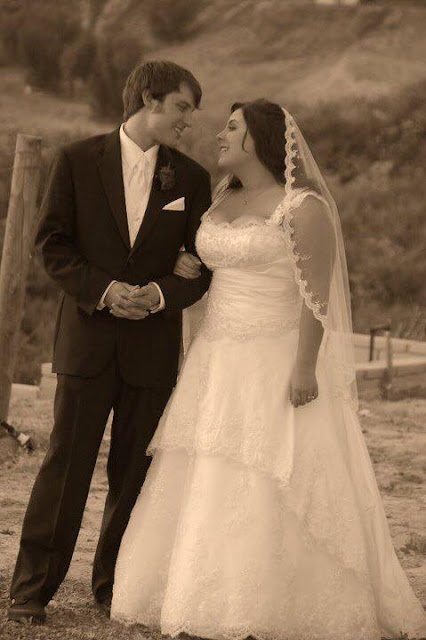 This is one of my all time fave
pics I took of these two 7 yrs ago.
I even took the top portion of the
pic and made business cards before.

I hope you enjoyed the tour.
The worn rug.
And my fave Cory and Brit
pic.
Oh...yes, and the fact that I am
BACK!

Linda at Mixed Kreations said…
Yay I'm glad your computer is back up! I have a Dakota too, but mine is a Lilac point Siamese. Love the weathered wood look too, and I really love the faux rug. Nice job!
May 29, 2018

Liz A. said…
Sorry about your computer woes. At least you have a backup for now. I hope it's an easy fix for the new one.

Sandee said…
I love what you did with the porch. That's awesome.

Love your son and daughter in law. What a lovely shot of them. Your son is most handsome.

I'm glad you're back.

Ann Thompson said…
Welcome back. So glad you found a way to return. Love the rug idea. I wish I had a screened in deck like that. I would spend all my spare time there.
May 29, 2018

The Joy of Home with Martha Ellen said…
Glad you are back in business, Pam. Computers are great when they work and you know not when they don't! I love your painted rug and your spot for painting and relaxing. I'm an outside gal until all the humidity returns and that's just what happened today! ♥
May 29, 2018

Jeanna said…
That is such a sweet photo of you two! Painting on a rug is a very creative idea with a very pretty result, why didn't I think of that for my mother? I lugged home a huge rug that never fit in the car and someone got it into the elevator and down a long hall then got someone to cut it to the shape of the patio. Whew, wish I would have read your post first!
May 29, 2018

Anonymous said…
Lovely photo of you both. Welcome back! I adore your porch and the rug is perfect. Very creative and cozy. I miss having a screened in porch for the pets to enjoy. Yours is perfect for you, Dakota and Lily!
May 30, 2018

MadSnapper said…
I really enjoyed the visit to your screen porch. LOVE IT.. and I like your laptop 'desk' LOL.... the table and two chairs are beautiful. you have a cozy and lovely porch with two pals to enjoy it with. you are blessed even if your laptop is broken. my desk top is really old, older than yours but I downloaded windows 10 on it when they came out with it and it does everything the lap top does and I like it better than the laptop. I have an ASUS and was shocked about the battery. did not know when I ordered it or would not have.
May 30, 2018

Darla M Sands said…
You are so creative! I really like your deck. We need to replace our second story deck off the kitchen (we have a ranch style home with walk-out basement). It's not safe but we've had too many other repairs to spend the money there. My dream idea is to either enclose it like yours or actually install a greenhouse. ~sigh~ Maybe someday. Meanwhile, I'm praying the predicted rains will cool things down so I can enjoy the covered cellar patio. Lovely photos, my dear. Be well!
May 30, 2018

Creations By Cindy said…
Happy anniversary to your children. I am trying to catch up. Mercy! With new baby last week and family life as well as trying to work PT It seems that even my once a week blogging is limited. Enjoyed the pictures. Hugs and blessings, Cindy
May 30, 2018

Lowcarb team member said…
Glad to see you are back, that's a lovely photograph of the two of you.
Always nice to see your photographs too, your porch and deck look good.

Happy Anniversary to Cory and Britney.