May 31, 2018
You have met Brandau before.
She is the cat that someone dropped
off on Brandau Rd and she came to the
barn to live with the kittens. 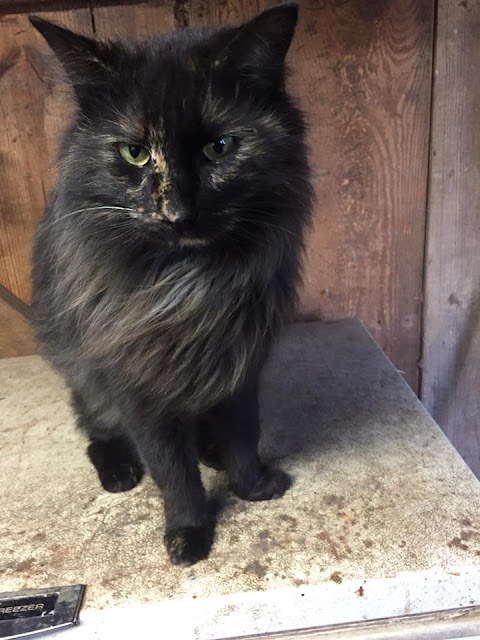 I gave her that name cause at one point
the Cat Shoppe was interested in
taking her, they thought they had a home
for her. This was before winter months and
I was unable to catch her.

With that being said, I have always called
her a her cause she appeared to have
Tortoiseshell markings and sometime
ago while reading up on Torties I learned
that they are always females.

Next~ was she fixed? No way for me
to tell. But with the kittens being
fixed we felt that we should be safe.
Chance we had to take.

A couple weeks ago us folks at
the barn noticed that Brandau was looking
rough. That beautiful hair was not so
pretty anymore. And she lost a lot of it.
She had sores all over her body and she
just looked frazzled.

Last week I was asked to try and
catch her. Our only thoughts were to hand
her over to Metro. I was unable to catch her
so yesterday Jeanna and I met at the barn and
we were able to catch her and get her in the
carrier. I headed to Metro Animal Care with her.
Metro usually will take in strays but they
only have room for 60 animals
and yesterday they had 179 in house.

I went in and told them the story of her
being dropped off, that we did not
know if she had ring worm or mange
or what. But the cat needed help.
I was then informed that a cat, dog, pig...
whatever that ends up as a stray at your
place becomes your pet.
I found this out before when trying
to get the kittens fixed without it
costing us a pretty penny. So as it is,
all three cats belong to Chris cause
they ended up at his place.
I find that a bunch of bull crap.
I could have a litter of kittens dropped
in my yard and it is up to me to
find homes, have fixed...etc.

Anyway...I was asked at Metro if I had
taken her to the vet. I explained again that
the cat was not mine. That she lived at
the barn where several different folks
boarded their horses and that I could not
afford to take her to the vet I had my own
pets to care for. She was very nice and
started entering info on the computer. I had
no clue what to do but then she handed me
a piece of paper with a vet clinic on it, with the
address. She told me to take her there and Metro
would pay up to $200.00.
WHAT?
I was stunned.

But I did take her to the vet.
Keep in mind I was so afraid that she
had ring worms so bad that she would have
to be put down and I would be the one
that had to make that call.
It was very emotional for me...

But GREAT news, she was having an allergy
to fleas! I stated that I had not seen any
and I was told that they clean so much
that they eat the fleas while grooming.
So for $167.00 bucks they saw her, she
was treated with flea meds,  antibiotic shot,
a shot for itching and a rabies shot.
All I have to do is treat her for fleas every
month, I will be treating the other two
cats at the same time. Jeanna and I
being the only two that care will take
turns buying the flea meds.

Brandau looked better today.
Just not feeling like she was itching
herself to death had to make a
difference.

I learned that Brandau
has been fixed. She carries a tattoo
on her belly that shows that. I learned
that most rescue places tattoo the cats
that are fixed. I also learned that she is
about 4 yrs old and yes, she is a tortie
so she is a she!

With all this I have decided that
the name Brandau just don't suit her.
I looked up names for black cats and
I took a survey on FB.
Shadow
Onyx
Raven
Ebony
Duchess
Elvira

I was leaning to Onyx but when I
looked at her today I think Shadow
suits her best.

Ann said…
Glad Shadow is on the way to a healthier life. She's lucky that she has you to care about her.
June 01, 2018

Darla M Sands said…
She is blessed to have landed where she did. ~hugs~ Best wishes to you both, my dear. And thank you for caring so much.
June 01, 2018

MadSnapper said…
shadow is perfect for her and glad you got her help. so sad that people drop pets off like that. I met a lady at the vets office a few years ago, she had 3 rottweilers, one she was getting checked out because someone left the rotti in her driveway. she has acreage and she said it is a never ending problem
June 01, 2018

Sandee said…
I'm glad you're taking care of her. I love her new name and I linked this post to Feline Friday. Shadow is a purrfect name.

Red Rose Alley said…
Poor Brandau. That was so nice of you to care for her and take her to the vet, Pam. I hope she is doing better. It makes me sad when dogs or cats have fleas. Must be so uncomfortable for them. I like the name Shadow too.

Betsy said…
She won't leave your side I bet. She knows where she is loved and feels the best.
June 01, 2018

Liz A. said…
I like the name Brandeau. It's unique. Glad it was only a flea reaction and not something worse.
June 01, 2018

Brian said…
Thanks for helping her out and we think Shadow fits, she sure is pretty.
June 01, 2018