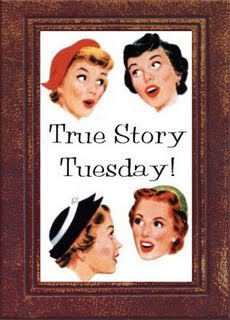 My nephew started his driving career
really early in life. Chase was just a
little tike when he decided to jump in
his Dad’s vehicle and back it out of
my Mom’s driveway. He could not
have been more then 3 years old or so.

We were all outside at Mom’s for some
reason when we looked up just in time
to see Ray’s vehicle rolling out of the
drive, you could barely see Chase’s head
bouncing up and down as it rolled down
and right across the street in to the ditch.
At the point that he hit the ditch, the
head disappeared as his body slid down
and out of the seat into the floor.

All was well, Chase was fine. It has been
a source of fun and laughter ever
since. Chase is now 26 years old.

But it really did not stop there with his
driving experience. When he was about
8 to maybe 10 years old when he took
his favorite Aunt Pam (that would be
me!!!) out for a go cart ride. My
mistake! We were having a fun time
in the lot next to my brother’s house
just riding around and laughing. Chase
wanted to take Aunt Pam for a ride,
so I hopped on. Now at this time I
was thinking this could not be a bad
thing, everything will be fine, NOT…..
Chase picked up speed, turned taking
a curve to head back the way we had
just come and I went flying. He
actually through me off the cart
right onto my butt (excuse me, my rear).

All was okay, I did not suffer from
my flying off the go cart experience
but it did make me think twice about
riding with him again.

If you are thinking this is the end of
this story, its not! When Chase was
14 years old my brother called me
and asked did I still have a stick shift
car. At that point I did not but my
daughter had one and she was just 17.
The reason for this out of the blue
strange question was that Chase needed
to learn how to drive one. Okay, like me
you are probably thinking why at 14 he
needed to learn to drive a stick….right?
Well get this, you can’t get your drivers
license until you are 16 but at 14 you
can drive a race car.

Yes, I said race car. Chase was going
to start driving race cars. Now before
I go on with that part of the story let
me first go over the part of me teaching
him to drive a stick. He pretty much
had the basic part down, he knew how
to shift since he had rode four wheelers
and motorcycles. So my part of
teaching was not that hard. But true
to Chase form, he had to scare the
crap out of me!

We are driving around the neighborhood
and he is practicing his shifting and
learning to use the clutch, brake, gas
pedal and stay on the road. With all
that done and things going well, he
heads down the main street that is a
straight through from one entrance
of the neighborhood to the other. It
has a couple of small hills and curves
and one stop sign. As we head down
this street Chase ask me when he will
be able to shift to 5th gear in which
my reply was that since we were in a
neighborhood that was not going to
happen. Now, he is a Montgomery
and we kind of have a mind set of our
own and don’t really like to be told
that we CAN’T do something.

The speed picked up, we topped a hill
and he say’s, want a bet? Okay, so I
was wrong, he was able to shift to 5th
gear, but not before I got my scare. As
he was shifting and operating the
clutch at a higher speed then he was
use to for a learning practice, he almost
looses control and I see the mailbox
headed for my side of the car! YIKES.

Chase was able to control it and all was
well, we did not even hit the mailbox.
But my heart was pounding and I
decided at the point, training was over
and he was ready for the track.

Chase went from racing go carts (he
knew how to take those curves with
or without me), to racing ARCA, BUSCH
and then Craftsman trucks. If any of
you ever followed racing my nephew is
Chase Montgomery. He took fourth
in overall points as a rookie in ARCA
in 2002. He also became the youngest
to ever win the pole in Daytona and he
also won first place in ARCA series in
Daytona. Later after leaving ARCA for
BUSCH he finished his rookie year in
10th position.

Through racing Chase was able to meet
many interesting people including Alice
Cooper when one year he raced with
Cooper’s name and picture on his car.
Cooper attended some of the races
and him and Chase have even gone
golfing together.

As his racing career moved on Chase
was signed by the late Bobby Hamilton.
I will never forget a comment he made
once when being taking to the hospital
in Texas after hitting the wall at the
track there. Apparently when the ER
doctor came in to see about him, the
doctor was not aware of the fact that
Chase raced cars, when asked what
happen Chase proceeded to tell the
doc that his boss ran him into the
wall. I am thinking at this time the
doctor was a bit confused until it all
came to light and he learned that
Chase was a race car driver. It seems
that while trying to pass at some
point, Bobby accidently pushed Chase
into the wall. Hey, it’s racing and it
happens.

Chase is no longer racing these days
but the desire to be on the track is
still there for him.
I was able to enjoy (actually walk a
whole in the ground) watching him
race at the old and new track here in
Nashville, in Memphis, at Bristol,
Lowes Motor Speedway and several
times in Daytona. I have viewed his
races from home, the stands and the
pits all the time remembering the
“driving experiences” that lead up to
his being out on those tracks. And
knowing all along, that I would never
have taken anything for being thrown
off the go cart or almost eating a
mailbox by him. Love you Chase.

Check out his website and read all
about this young man at
http://www.chasemontgomery.com/

Thanks for stopping in to read about
my nephew.
Pam

Foursons said…
Wow! That's so cool! My hubby is a race fan and knows exactly who your nephew is. How fun to read the blog of his auntie!
November 03, 2009

Rachel said…
That is just so funny - how you were part of those experiences that shaped his racing career!

I think my folks were too traumatized after teaching me to drive... I ended up teaching my little sister :)