I am throwing this Trash to Treasure
post together without much work or
thought since the last couple of days
have not been the best days for me.
Sunday I decided that I wanted to move
a small dinning outdoor table from my
patio to my deck, it was not heavy but I
guess in the way I bent to pick it up was not
the best way. I felt something in the old back
pop and I have been in some pain. So this morning
as I was moving slowly trying to get ready for
work I snapped a couple of pictures for this post.
Now that I hope I have won your concern and
well wishes (LOL)….lets move on to the post
at hand.

This is a candle holder that I picked up a couple
of years ago at an antique store up the street.
I have not done anything with it. The color
was fine with me since my three of my walls
are this color, I did add some candles to match
my room but as you can see it is bare now, a
bedroom color change and I have not replaced
the candles! I paid $2.00 for this baby. 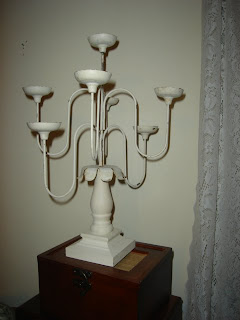 Now this next thing, my bed was a project that took
me awhile to complete. I bought this full size metal
frame bed at the flea market about 17 years ago. I
paid $30.00 for it. It is an antique and has small
metal wheels on it. It came with the bed rails
(frame), the headboard and footboard. I fell in
love with it even in its ugly state. Sorry, I do not
have pics of it before but never fear, I think I can
paint a pic of it in your mind as I describe it to you!!

It was a bright, royal blue, with flaking paint all
over it! Under that flaking paint you could see
what looked like brown and sometimes you
could get the site of a white color. There was
no rust on the bed but it really needed some
loving care. The metal wheels, frame, headboard
and footboard were all in great shape except for
that ugly colored, flaking paint. There was only
one dent in the headboard, not even noticeable.

I had all the plans of stripping this down and
redoing it, but my problem was, where was I
going to do this? My home does not have a carport,
or a garage. I have an outdoor shed but it is always
so packed that you can’t really get in there to
work, plus, stripping a piece of furniture is not
something I wanted to do in my shed. This project
would have to be done outside.

Remember, I said I had no carport, no covering,
so I limited this project to the spring….several
springs…..like maybe four. Yes, stripping this
baby was not going to be as easy as I had hoped
and did not go as fast as I had wanted it to. One
layer at a time, painting on stripping, scraping
off gently as not to hurt the metal, then back
over it again and again.

After a little bit of work I actually checked into
some furniture stripping places to see what I
could get it done for, wow, those prices! Then
there were some places that would dip furniture
but they would not touch a metal piece for fear
that it would rust afterwards. So, I was left with
doing it myself. Besides, where is the pride if I had
hired it done anyway?

Okay, four years, maybe five, I finally had it
stripped, I lightly sanded it, cleaned it really well
and primed it only to turn around and repaint it!
Yep…I did. But, I know now that it only has one
coat of brushed on paint over a metal primer. I
do not plan on painting it again, and hopefully I
will not ever have to strip it again.

But now I can look at it and know the hours of
work I put into it and know that with pride “I
did it”…I took one mans trash from years gone
by and made it my treasure. 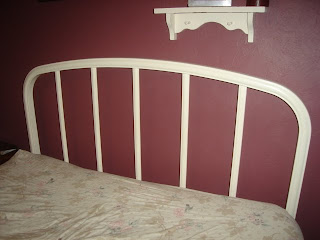 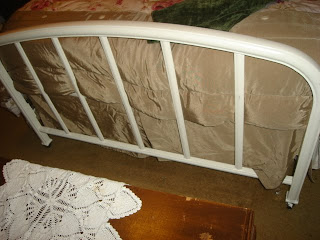 Denise Marie said…
$30 and some TLC...I love it!! I'm with you girlie...my home has been full of sick kids and I think they gave it to me...my posts aren't great yet, but I'm still movin' forward. blessings to you and I hope your body gets to feeling better soon.
September 01, 2009

jeanne said…
Pam, I am so proud of you for finishing the bed frame. I probably would have given up long ago. It doesn't matter how long it took, YOU DID IT!! It looks fantastic too. I do like the candle sTick very much. a great price too. thanks for sharing your treasures today.

Carrie said…
Great transformation of the bed. The design is very attractive.
September 01, 2009

LOVE THE CANDLE OLDER TOO AND GREAT PRICE.

sorry,
all caps a boo boo

Beth@The Stories of A to Z said…
I hope your back is feeling better now and I'm impressed that you stuck with that bed! Wow. Your hard work paid off though. It looks great :).
September 01, 2009

Cass @ That Old House said…
The bed frame looks fantastic and it doesn't matter how long it took -- what matters is that it's done, and it doesn't need to be done again!

joyh82 said…
Wow what are bargain you got on that candle holder. WTG with the bed frame too.
September 02, 2009

Pam D said…
Ugh on the back... I'm sorry! I hope you can rest it and get some heat on it soon. Love the candle holder.. I just love candles and the glow they put out. And I'm so impressed with the bedframe. I refinished an old wooden mirror a long time ago, and I painted Adam's bedframe when we painted his room; I'm almost silly-proud of those things because I did them. So I understand how you feel about that bed... you can give yourself a pat on the back!
September 02, 2009