July 15, 2009
Back 5 years or so ago I bought a store bought
version of a Zen Garden. It came with a small
tray, this powdered stuff that I guess was
suppose to be sand, rocks and a couple of rakes.

I worked with customers at that time coming
in and placing print orders so I sit it on the
end of my desk. A few played with it, most
did not. Shortly after getting it for the desk
I moved to another building and when I did,
I broke the tray. I wanted to replace it but this
time I wanted a correct one (with real sand).

I went to the Dollar store and found a ceramic
dish in a basket. I had a friend pick me up
some sand on her trip to the beach and I
made my own Zen Garden. Complete with
real sand, rocks and my racks. It is a stress
free feeling to pick up a rack and move the
sand around.

This little version of a Zen Garden did not
last long in the office I worked in. There
were only 3 of us in Photo Services, two
photographers and I. Thanks to my then
co-working photographer and now my
friend, Phil, it became a sandbox. Phil
loved to play in it but he did not always
play pretty in the sand and a time or two
and I had to kick him out! Sand everywhere.

First it started as simple as just stacking
the rocks to see if they would stay standing.
Then it went to me decorating for all season’s
and events. To Phil taking my water bottle
and filling the dish with water just to see
how long it would take for the sand to dry
out. Yes, it took days. There was also the
time he sprinkled water in it, took the rack
and moved it around to look like maybe a
cat had been in there.

It got to a point that when one of the boy’s
(photographers) went on vacation they
would bring back something for the
sandbox. It got decorated for Halloween,
Christmas, my cruise, Barbie picnic stuff
for summer, race car’s for racing season
since my nephew was racing to a small
remote operated Hummer! Thanks Phil,
I thought I would never keep the sand off
my desk with that one. Or the time I cut and
colored a small deck of cards and placed them
on the rocks, broke up sticks and placed what
looked like a flame in the sticks and made a
sign to say “Hobo Camp”, in honor of the guys
since they played cards at lunch. I even had a
customer that would come in and sit and play
in the box. Once she made Raptor tracks in it,
took a paper clip and made a stand, then attached
a note that said “Beware of Raptor”. When she
changed jobs within the state and would not be
coming in to see us, I made her a ZEN GARDEN
(yeah right) to take to her new job.

The sandbox, the playing and the fun of it was a
stress reliever for my office, you could sit and
play in the sand and we discussed the events of
the day. Now, after moving to my new job last
year, there is no place to put the sandbox where
everyone can enjoy it. But, even with that, it sits
on the back of my desk and still gets the season
decorating theme.

I thought my sandbox was out of reach until I
came in last week to find a paper cat cut out
and placed in there with a pulled and stretched
Tootsie Roll rolled in the sand next to the cat!
Thanks Angel (and let me say this name does
not fit her). Angel loves her cats so she had to
extend that and make my sandbox a litter box! 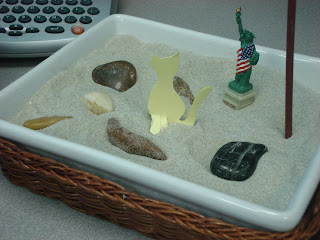 Make a little sandbox for your desk. You can not
believe the fun you can have with it.

Thanks for stopping in and I hope you enjoyed
the story and the pics. 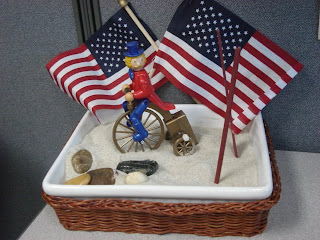 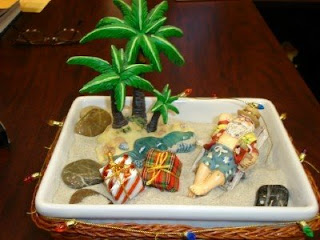 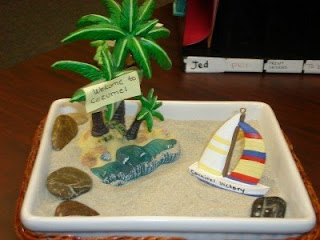