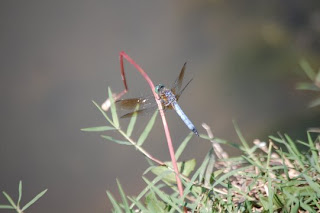 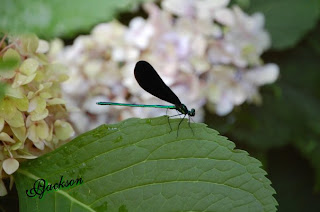 When I was younger I never thought about a
dragonfly with any interest. I just thought of
them as flying bugs that hung around the lake
when we went fishing with my Dad. At that age
I never looked at them as a form of beauty.
They were just pesky bugs flying around.
I remember hearing them referred to as
“Snake Doctors” from my Mom.

The last few years I have begun to look at
them so differently. They are so colorful
and so graceful in their flight around. I
took more notice to them about four
years ago when a friend’s daughter was
graduating from high school and I was to
fly to Florida to attend the event. She so
loves the dragonfly so I felt that would make
a great gift. No, I did not take her a dragonfly;
I painted her one on canvas. At the time
I was studying them in books to see just
how to paint one, I then noticed their beauty. 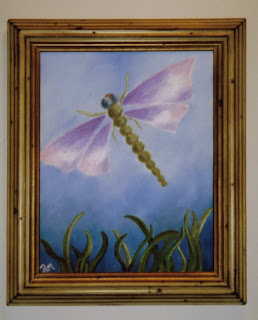 Then last year I bought myself my first “real”
camera; a professional like camera. Not long
after getting it I was in the backyard snapping
away when a beautiful dragonfly came up off the
creek to fly around my plants in the backyard.
I waited for him to light somewhere so that I
could also snap him. He was a green color with
black wings. I have since learned that he is a
damselfly. Both these breeds belong to the order
of Odonata. They come from the same family I
take it but there are differences in them.

A damselfly is long and slender where a dragonfly
is usually stocky. On a dragonfly the eyes touch
or nearly touch at the top of the head, and the
eyes of a damselfly are separated, appearing to
each side of the head. Whatever the difference
I will probably still look upon them as being
“dragonfly’s” and I will continue to enjoy their
flying around and lighting from time to time so
that I may capture them on the camera.

There are 450 species (according the internet)
of dragonflies and damselflies that live in North
America, with about 150 of those species living
in New Hampshire and Vermont .
They can hover, fly sideways and backwards (I
have not seen the backwards trick yet), and
turn 90 degrees on an aerial dime. They prey
upon other insects like mosquitoes (and on my
creek they have a lot of those to fest on). Plus,
they can dart over water at 35 miles per hour.

Dragonfly’s eggs are laid and hatch in the water.
They will live under the water for two to four
years while they molt roughly a dozen times
before them crawl up a stem or rock in the
night or early morning during a warm season
and then squeeze out of a split in the skin on
their backs. They inflate their adult body with
air and pump up the wings with blood. The
wings then spread out to dry.

I wanted to share that since all that was new
to me, I thought you would enjoy learning it
also. The next time you see a dragonfly or a
damselfly, step back and enjoy their beauty
as they fly around.

Pam D said…
Oh my gosh... you painted that? How gorgeous! I need to get you to paint something for Adam's room! We know all about dragonflies and damselflies; the "bugboy" has caught many of each, and we've studied them extensively. As a matter of fact, a LARGE dragonfly flew into our garage right as we were embarking on our Destin trip last week; it found itself in a "bug tent" before it knew it, and it's now flying around the Destin canals!
Having lost your nephew to cancer, I don't know if you're aware of the Dragonfly project; it's tied in to the story of the dragonfly. Go here: http://www.dragonflyproject.org/storycards.html to check it out. If you haven't already been made aware of it, it will make you love dragonflies even more!
June 15, 2009