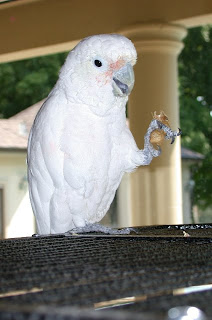 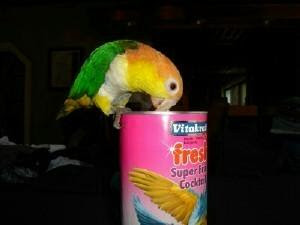 It’s spring and I love to listen to the birds singing
outside. Alas, I am not feeding them anymore for
fear of bringing the squirrels back to the yard but I
figure they will not starve to death.

I have never wanted a bird for a pet but I have had
friends that have had them. My sister in law, Lori
has one and so does my brother. Lori got hers first,
actually my brother Ray got it as a gift for her. I can’t
remember how long she has had Lola but I want to
say about five or six years now. Lola is a pretty little
colorful bird. She is a one woman bird! When Lori
first got her she would not let anyone else handle her.
I love animals, esp. if they belong to someone else and
I don’t have to care for them. So I was drawn to Ms. Lola
only she loved to take plugs out of my hands and fingers.

I used to house and animal sit for
Ray and Lori a lot
and I was so determined that
Ms. Lola was going to
like me. So we started with me
telling her that if I took
her out of the cage and she bite,
pecked or took a plug out,
she went back in. I would no sooner
get her out then I was
putting her right back in. She learned…
smart bird. Lola will
allow me to take her out now, she does
not peck at me anymore.
She loves to crawl up on my arm into
my hair and try to nest.
But, she is still a one woman bird.
As is Ray’s bird being a
one man bird!

Ray got TJ about a yr. ago. Beautiful
big white bird
(sorry, I have no clue the real names
for these critters).
TJ is not really the playful kind of
bird that Lola is.
He loves to sit on the top of his
condo (cage) and view
the great room. He will raise
cane when Ray walks out
of the room but will be silent
when Ray is there. He will
fly across the room to sit on
Ray’s shoulder while he
messes on the computer.

TJ is not a fan of mine, or Lori’s
or anyone’s from what
I hear. Ray was telling me the
other day that Lori can
try and give him a nut and he
will turn away. He did
the same to me. But if Lori lays
it down, he will walk
over, pick it up and throw it in
the floor. I put something
up on the cage for him and when
I walked off he picked
it up and ate it. I was surprised.
He will not let me touch
him, let alone hold him.
TJ can say “What you doing Duffy” (talking to the dog)
and “ Big Boy”. Lola can whistle the theme song from
Mayberry RFD or is it the The Andy Griffith Show…and
the Oscar Myer bologna song. Ask her if she wants fresh
water and she will shake her head yes. That one threw
me when I first saw it!

Anyway, they are fun to visit. Fun to see, watch and listen
too. More fun to see them interact with their owner.

Thanks for dropping in,
Pam

Pam D said…
I know the top one is a cockatoo.. not sure on the brightly colored one, though I'd guess some sort of parrot. They certainly have strong personalities, don't they? It reminds me of my favorite parrot joke:

A young man named Victor received a parrot as a gift.

The parrot had a bad attitude and an even worse vocabulary.

Every word out of the bird's mouth was rude, obnoxious and laced with profanity.

Victor tried and tried to change the bird's attitude by consistently saying only polite words, playing soft music and anything else he could think of to "clean up" the bird's vocabulary.

Finally, Victor was fed up and he yelled at the parrot.

The parrot yelled back.

Victor, in desperation, threw up his hand, grabbed the bird and put him in the freezer.

For a few minutes the parrot squawked and kicked and screamed.

Then suddenly there was total quiet.

Not a peep was heard for over a minute.

Fearing that he'd hurt the parrot, Victor quickly opened the door to the freezer.

The parrot calmly stepped out onto Victor's outstretched arms and said "I believe I may have offended you with my rude language and actions.

I'm sincerely remorseful for my inappropriate transgressions and I fully intend to do everything I can to correct my rude and unforgivable behavior."

Victor was stunned at the change in the bird's attitude.

As he was about to ask the parrot what had made such a dramatic change in his behavior,the bird continued, "May I ask what the turkey did?"

Anonymous said…
Just had to laugh at Pam D's comment; too funny! Hmmm DJ and Lola sure have their individual personalities and loyalties...I have to say that for them.. It figures they in their own little way have accepted you to a point...I can just picture your determination in winning them over. What a hoot! Birds are loyal.. My brother in law has one similar to Lola and she does tricks as well and enjoys the odd shower now and again... they open the facet for her and she spreads her wings for a quick one..but when she is not in the mood...leave her alone..(smile)....however I will not put a hand next to her..she as Lola is loyal to her owner and can take a nip out of you in a NY sec! She sharpens her beak a lot so you can just imagine the hurt.. They are neat to watch and for the size of their brain...are a real intelligent bunch! Nancy M; Ohio
March 18, 2009