Stealing From Sandra and the H and J!

January 29, 2018
I threw this together the other day.
My daughter is getting married in April
and will be taking the name Howell when
she does. They recently moved and needed
something for the front door. 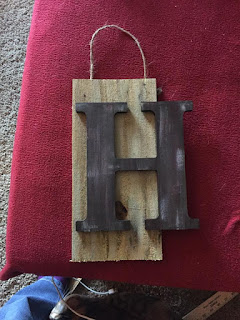 I had made this one about a yr ago and
gave it to Amber. But with the wedding/
name change thingy coming up she gave
this one back to me. It hangs on my
front door right now. 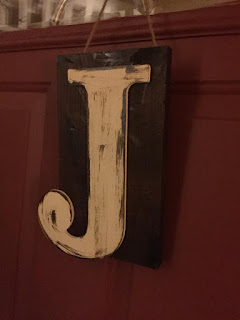 Which reminds me that I need to
hang my Valentine one
up on the door. Will
do that  later  today.

This morning I am picking
up a friend that I have known
since high school, he is having
a skin graph today on some burns
that he got a couple weeks ago.

He was cooking hash browns on
the stove, left the room for
a few mins to come back to a
flame. Grabbing the skillet and
running to the front door.

I went over the other day
to check on him. I learned
(he has no siblings and parents
are gone) that a cousin was taking
him today, dropping him off and
another one picking him up....
I am a believer that if you are having
a surgical procedure you need
someone there and dropping off
is not doable. With learning about
this I said I would take him and
stay there while he is in surgery.
This is will probably be an all day
thing so Dakota is going to moms
and Lily can chill here at the house
alone.

Well, I don't follow Respice Respite but Sandra does and she did some Sunday Stealing. So I am stealing what she stole from Sunday Stealing...haha....hope you all could follow that.

1. Do you use certain text or ring tones for specific people? Who gets their own?

2.When did you get your first digital camera? Are you all digital now? Do you still use film?

I have always had cameras but I got my first digital in 2004. Small point and shoot. Got my first professional camera in 2008, have 3 now.

3. What do you think someone else would say the most daring thing you've done is?


Wow...I had to think about this one. I would say going up in a hot air balloon at the age of 20!

4. Do you talk with your hands?

5. What kind of milk did you drink, growing up? And now?

Growing up we had whole milk. When my kids were growing I changed to Skim and then to Almond milk. I loved milk so much that I started drinking it every time I had something to drink. Had to stop that so now I hardly ever have buy milk.

This one is hard. I don't eat a lot of pie but
it does depend on the time of yr. Around Thanksgiving I love pumpkin. But I have to say that I think my fav overall is apple. That is really funny cause I don't to eat apples raw.


YES! I have a friend that can't understand why I don't keep notes in my phone. It would keep me from misplacing my notes if I did that but I rather have a piece of paper to look at then going through this app and clicking here and there to get that info.

8. How old were you when you took your first commercial flight?  To where did you fly?

I was 18, flew to Atlanta Ga where my cousin picked me up and I spent a week there visiting with them and my granny. I think that flight lasted about 45 mins. haha...next would have been to Fla to board a cruise ship and then from there at the age of 51 I jumped on my first LONG flight to Calif.

Hoping all have a great start
to this week....

thanks for stopping in,

MadSnapper said…
this stealing thing is going great, i love the answers and these questions were worth my stealing. there is a blog called Sunday Stealing and once a week it post questions to answer and be stolen. Respice stole them, i stole them from her and now here you are. this is the blog if you want to steal more questions each week.
https://sundaystealing.blogspot.com/

i am smiling at you saying you have to change our your front door decoration to Valentine. I have never in my life hung anything on my front door. no one comes to our door except salesman and door knob hanger people... i go years without seeing the front door since we come and go through the garage. bob sees it daily when he gets the mail though.
January 29, 2018

NanaDiana said…
You are such a kind person to do that for an old friend. I am like you- I don't think anyone should have to face a procedure alone knowing that there is no one waiting for them--or to hear how they are doing. You are a good soul.

It's fun that you 'stole' something but gave it back by posting it here. lol

Darla M Sands said…
I thought of you today, wishing I had my camera (my 'dumb' phone can't take photos) because I really need to share a neighbor's front porch with you. Maybe I'll do that one of these days, just pause going by and take a snap with my Canon Sureshot. ~grin~ I'll share, though, in case it never happens. They have a foot tall (?) figurine of Big Foot, that classic image from the seventies (I think). Too funny. Hope you feel well today!
January 29, 2018

Sally said…
You're such a good friend, Pam. I hope he has good results; that's a sad thing to happen. :(

I'm off to St Aug today to spend time with the greats. :)

My first flight was to Mobile, Alabama; the next to California, and then to New York. I am happy now to stay on the ground. lol

Rhodesia said…
Oh I know about flames in the kitchen! I happened to me about 45 years ago, and I did the same thing grabbed to pan handle and rushed it all outside. My hands were burnt but the house stayed intact!! Hope all the grafts go well I feel for him. Diane
January 29, 2018

Sandee said…
I agree that if you're having surgery then you need someone there with you. It's a comfort to the person that's having surgery.

Loved your answers. My first commercial flight was when I was 18 too. I flew to Mexico.

Christine said…
You are a good friend. Enjoyed reading your answers too. Very exciting news about your daughter, April will be here soon enough.
January 29, 2018

Red Rose Alley said…
I'm sorry to hear that your friend burnt his hand, Pam. That is so nice of you to take him to his surgery and stay with him. What a great friend you are. Wow, you went on a hot air balloon? I've always wanted to do that, but yet it would scare me a bit.

Have a wonderful week.

Ann said…
Hope all went well with your friend. That's so nice of you to offer to take him and stay and wait till he's ready to go home
January 29, 2018

Rain said…
My gosh how awful about your friend...I can't imagine a skin graft. You're so sweet to help him out. :) Your letters are very cute! I am thinking about Valentine's day myself :)
January 29, 2018

Pilar said…
Too bad your friend burned himself, but I think that is so kind of you to be there for him! Have a great week!
January 29, 2018

Jeanie said…
You are a good friend, Pam. I know he had to appreciate your taking him to the surgery. I agree -- you need someone there with you.
January 30, 2018